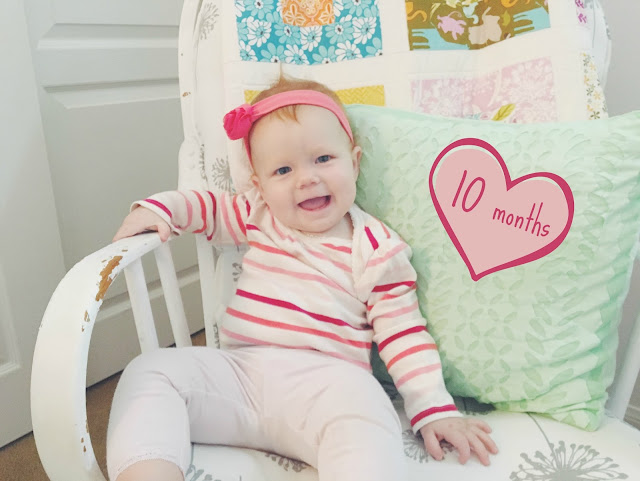 Growing // Talitha actually lost a few ounces during her nursing strike (down to 21 lbs. 5 ounces), but she's bounced back and feels heavier than ever. I'm guessing she's over 22 pounds by this point.

Eating // T is still nursing four times a day - around 8am, 12pm, 4pm, and 8pm, but I think she's getting ready to drop one of the mid-day feedings. It's crazy to think that we will be done-ish with nursing soon. She loves any and all table foods, and it's a challenge to keep enough fruits and veggies ready to go, so I don't hand her carbs and other processed stuff out of convenience.

Doing // Clapping, waving, knowingly saying "mama" and "dada," scooting herself down off low furniture like our bed and the living room ottoman, getting her top two teeth

Loving // People-watching, playing in the Tupperware drawer, wrestling, crawling on the ground outside and getting filthy

Loathing // Still hates having her diaper or clothing changed... Also, does not like when I feel around her gums for new teeth