It's almost time to sleep train another baby. The thought fills me with both joy and dread. I have surprised myself in motherhood that I'm more laid back about most things than I thought I'd be... germs, messes, worrying about safety and health, bumps and bruises, etc. I seriously just go with the flow. Zianne gets bit by another kids in Sunday School? Oh well. That's what toddler life is all about... 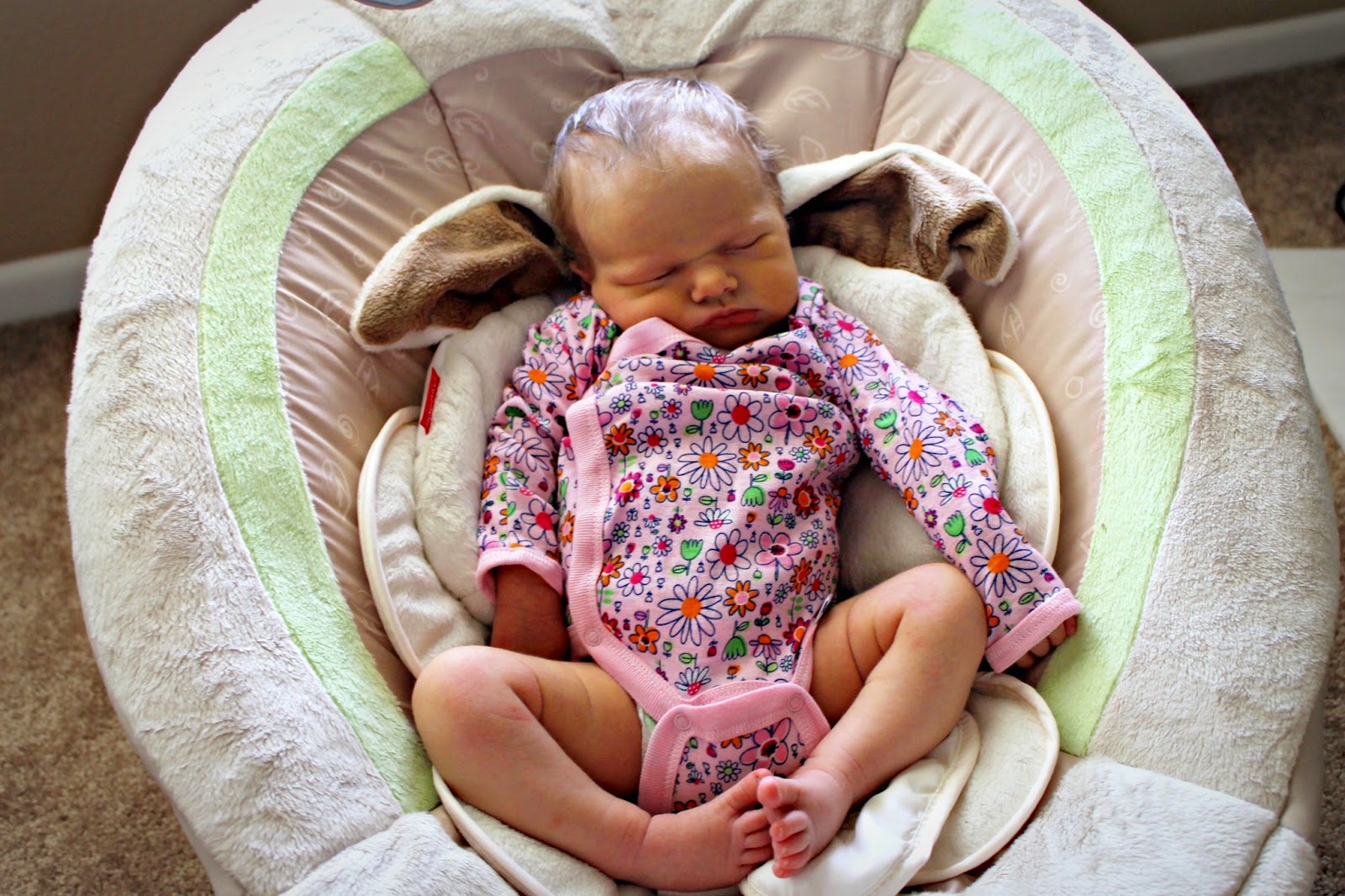 But if there is one thing I am NOT laid back about it, it's sleep. I am determined to train my kids to sleep, even if I don't sleep for the first two months of their lives as I teach them to slumber peacefully. I acknowledge that I am a borderline psychopath when it comes to sleep training, and I've already seen my anxiety levels rising over the past few weeks as I gear up for round #2. Now that Zianne is such a good sleeper {minus the waking up feverish, coughing, or congested ALL winter long... poor girl!}, it's easy to take it for granted... plop her in crib, say "night, night," and walk out. We don't worry too much about quiet voices or lights on in other areas of the house, thanks to a sound machine and baby who just knows how to sleep well.

But suddenly I'm realizing that we have to transition back into hardcore training mode. We have to follow routines, speak softly, dim lights, etc. Because if there is one thing any sleep training mama will tell you, it's that you basically work your ass off for a few months and enjoy the riches later on. I literally used to break a sweat putting Z to bed when she was an infant. I've been enjoying the riches for a year and a half and now it's time to WORK again. I've already started hushing Micah when he gets too loud during nap time, and I cringe when cabinet doors and toilet seats bang loudly during sleeping hours.

Over the past year or so, I've had lots of moms ask me for advice on sleep training, so I thought I'd share my notes here as well {the condensed version of many emails}. A quick disclaimer... I don't care if you sleep train or not. I don't care if you co-sleep. I don't think there is one right way to do parenthood. I just follow this method because it's worked well for me, my child, and our family as a whole. I have friends that are more vigilant than I am on their schedules, and I have friends that co-sleep, do extended night nursing, or don't do routines at all. I think they are all great moms and I love seeing their different styles because it keeps me humble and shows me other alternatives out there when I run into a parenting problem and am looking for a solution. Also, I think there are gray areas for all of us. For example, I don't co-sleep... except for during week four of newborn life from 6-8am when I am utterly exhausted. 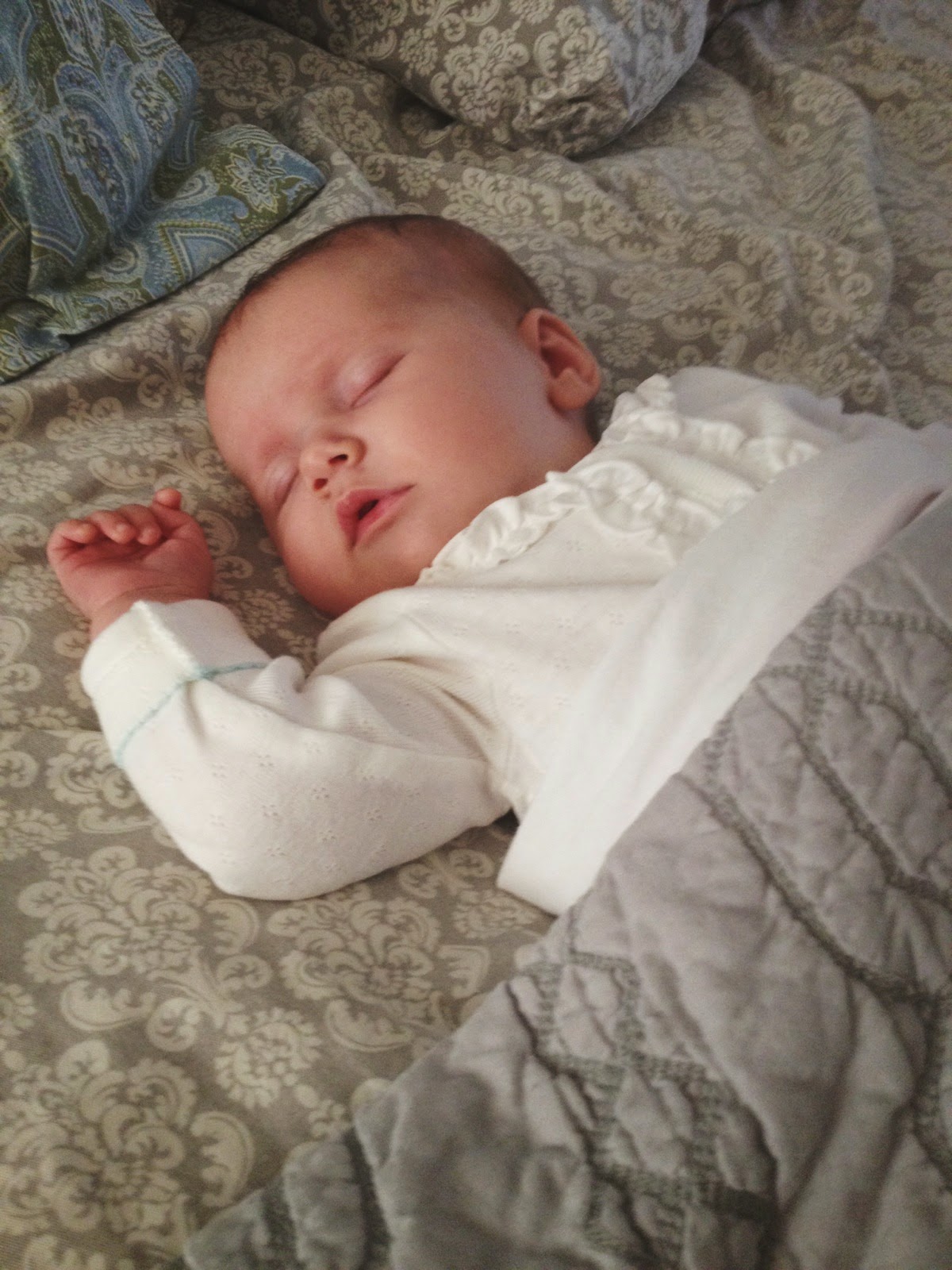 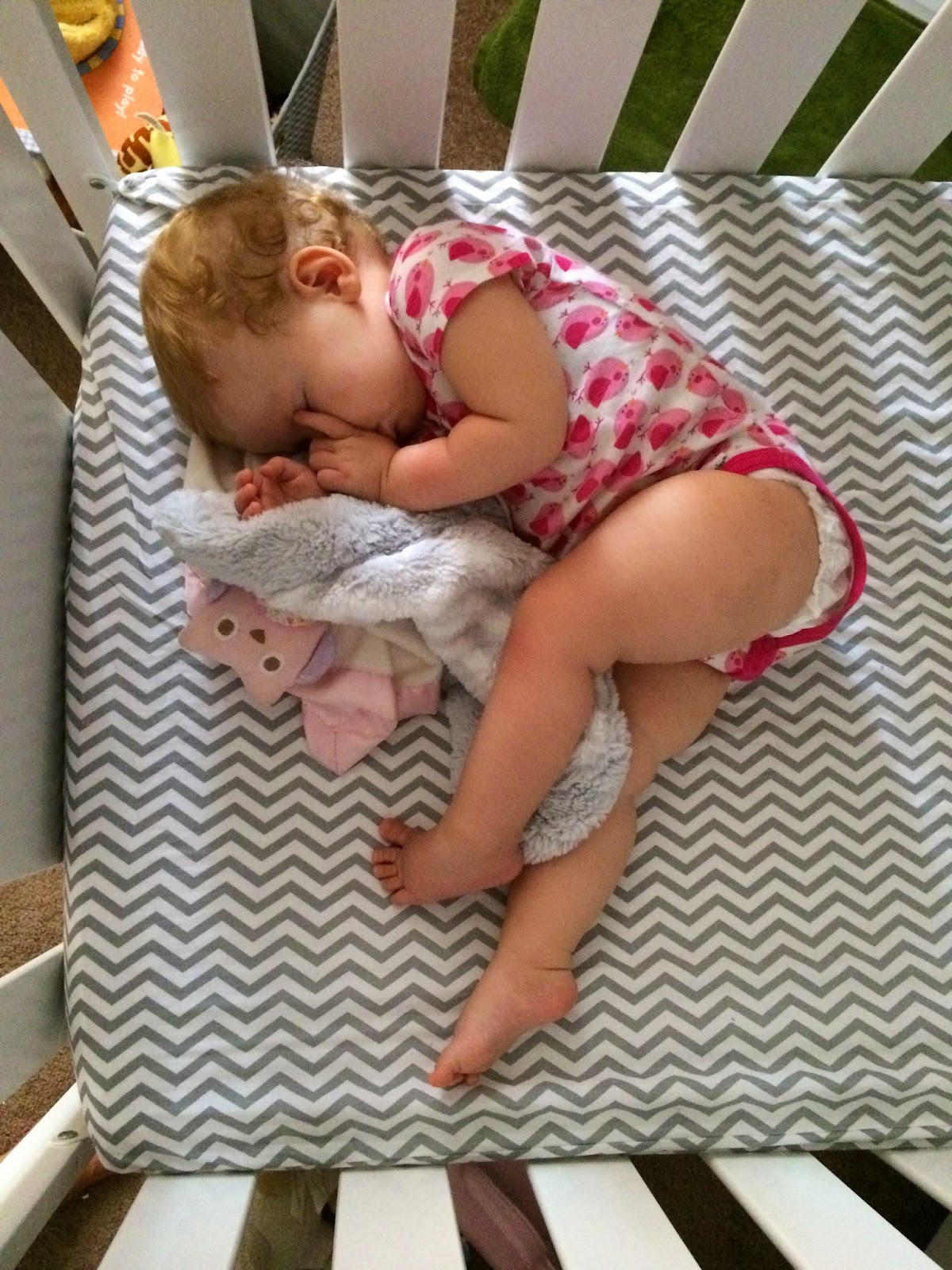 I basically follow the Baby Wise method with some of my own variations, because again, you should make sleep training work for your family, not be a slave to a book. If you don't like using the term "Baby Wise" then you don't have to... most sleep training specialists/consultants follow roughly the same model of frequent day feedings on a sleep/eat/wake cycle with a goal of gradually extending nighttime sleep. Call it what you want.

1) Follow the sleep/eat/wake cycle. As soon as baby wakes up, feed him. Then try to keep him awake for awhile. At first he will only stay awake for five minutes, eventually it will be 15 minutes, then a half an hour and so on. Z's wake/play times were soooo short forever. She didn't even stay up for more than an hour at a time until she was at least six months old. Basically you never want to nurse/feed the baby to sleep, except at nighttime. At the bedtime feeding and any middle of the night feedings, you feed and put them directly back to bed.

2) This is the biggest factor. NEVER let your baby go more than three hours without eating during the day until he is sleeping through the night. And remember feeding times are included in the three hour schedule. So if baby starts eating at 1:00pm his next feeding should start by 4:00pm. So it might look like... nursing 1:00-1:30, awake until 2:00, sleeping until 4:00, nurse right at 4:00 {and if he wakes up earlier than 4:00, say at 3:30, you just feed him right then so your next cycle starts at 3:30 and he should start eating again by 6:30pm}. No long naps period until he earns them by sleeping through the night. This is how you teach them the difference between days and nights and get them sleeping longer stretches at night.

3) The daytime schedule is EXHAUSTING for awhile, especially between 2-4 months. While I was training Z to sleep in her crib {we started with crib naps around 8 weeks old}, she often took these horrible 25-45 minute naps, but I stuck with the routine no matter what. As long as it had been at least two hours since her last feeding, I would feed her again as soon as she woke up from her nap, even if she slept under an hour. {If the nap was so short or non-existent that two hours had not yet passed since her last feeding, I would let her remain awake until the two hour mark and then start her next feeding right away.} Don't be afraid maintaining a 2 or 2.5 hour feeding schedule during the day, even though it's SO tiring, because it should start to pay off at nighttime. Basically, we didn't get consistent, longer naps from Zianne until she was six months old... but she started sleeping  8-10 hours a night by ten weeks, so it was worth it to me! And she's an excellent napper now as well. Some newborns love long daytime naps {3-4 hours}, and it can be so tempting as an exhausted mom to let them sleep, but don't do it. Wake them up to eat every three hours or they will be waking you up in the wee hours of the morning.

4) For nighttime you want to create a routine and repeat it every single night. For us this meant lights dimmed in our room {and eventually the nursery} and the sound machine on. I would feed Z on one side and then change her diaper between sides, so that if she fell asleep on the second side I could put her right in her crib without waking her. Just do the same routine every night no matter what.

5) Don't worry about a fixed bedtime at first. For awhile I would feed Z around 9:00pm and she got to the point where she would consistently sleep until 3 or 3:30am, nurse, and then sleep again until 6:00 or 6:30am. When she got to this one-waking schedule around 8-10 weeks, I started doing a later feeding {anytime between 10pm-midnight} and she started sleeping until 8:00 in the morning at 10 weeks. Once she was consistently sleeping through the night for a few weeks, I gradually pulled her last feeding back by 15 minutes every few nights until she was going to bed around 8/8:30pm. The point is that you want to get your baby sleeping through the night first and then toy with the schedule as needed! Don't tie yourself to the early, ideal bedtime of 7 or 8pm if your baby is not making progress sleeping through the night. Most of my friends who have successfully sleep trained do a late feeding near midnight for quite awhile. Some people call this a "dream feed," because they put their baby down around 7 or 8pm and then try to nurse a few hours later without fully waking the baby, but I just considered the late feeding the last feeding of the day and put Z down for the night at that time. The 7-10pm(ish) stretch was just another sleep/eat/wake cycle in my opinion. Again, give it any label you want, but be open to the late night feeding, because midnight is better than 4am. I promise. 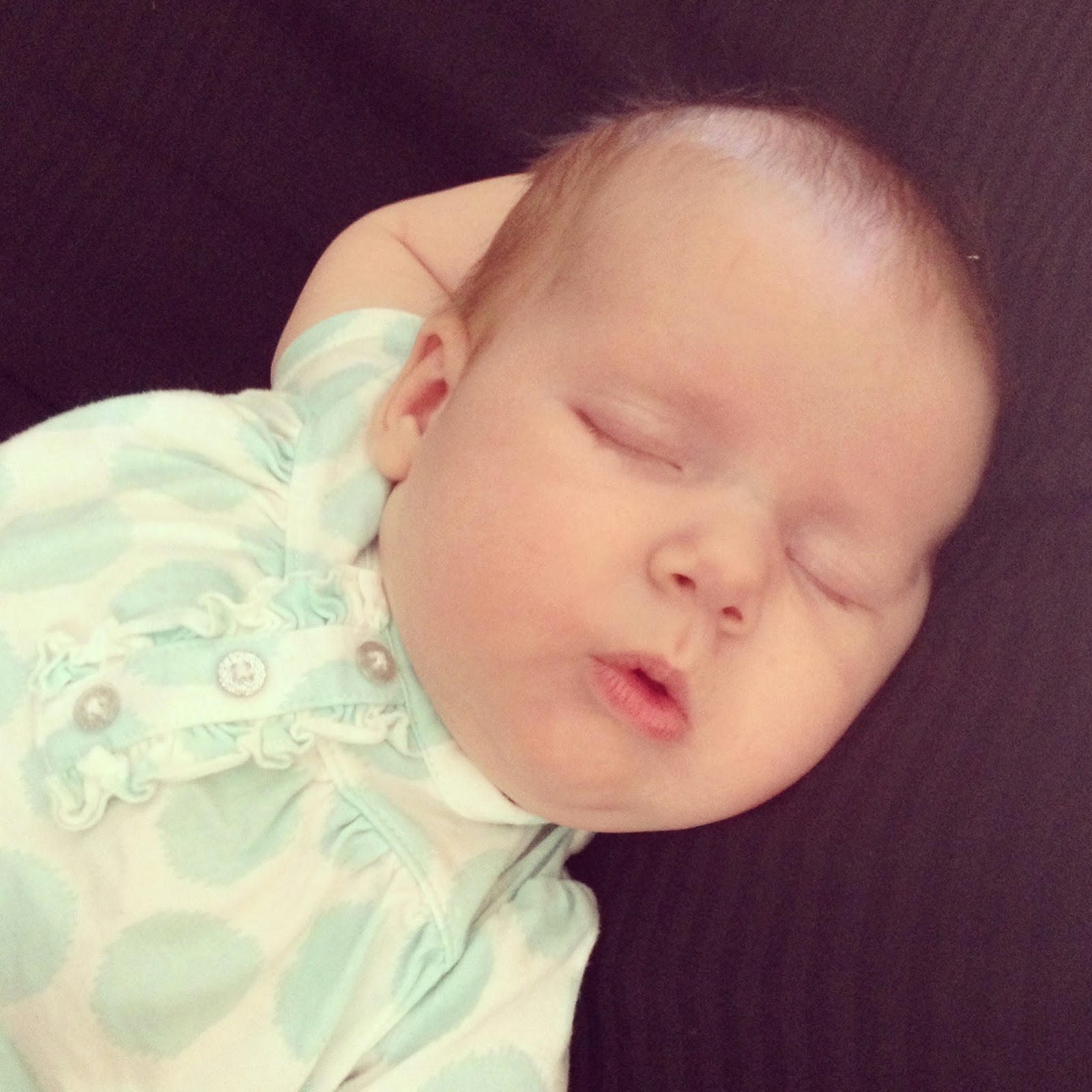 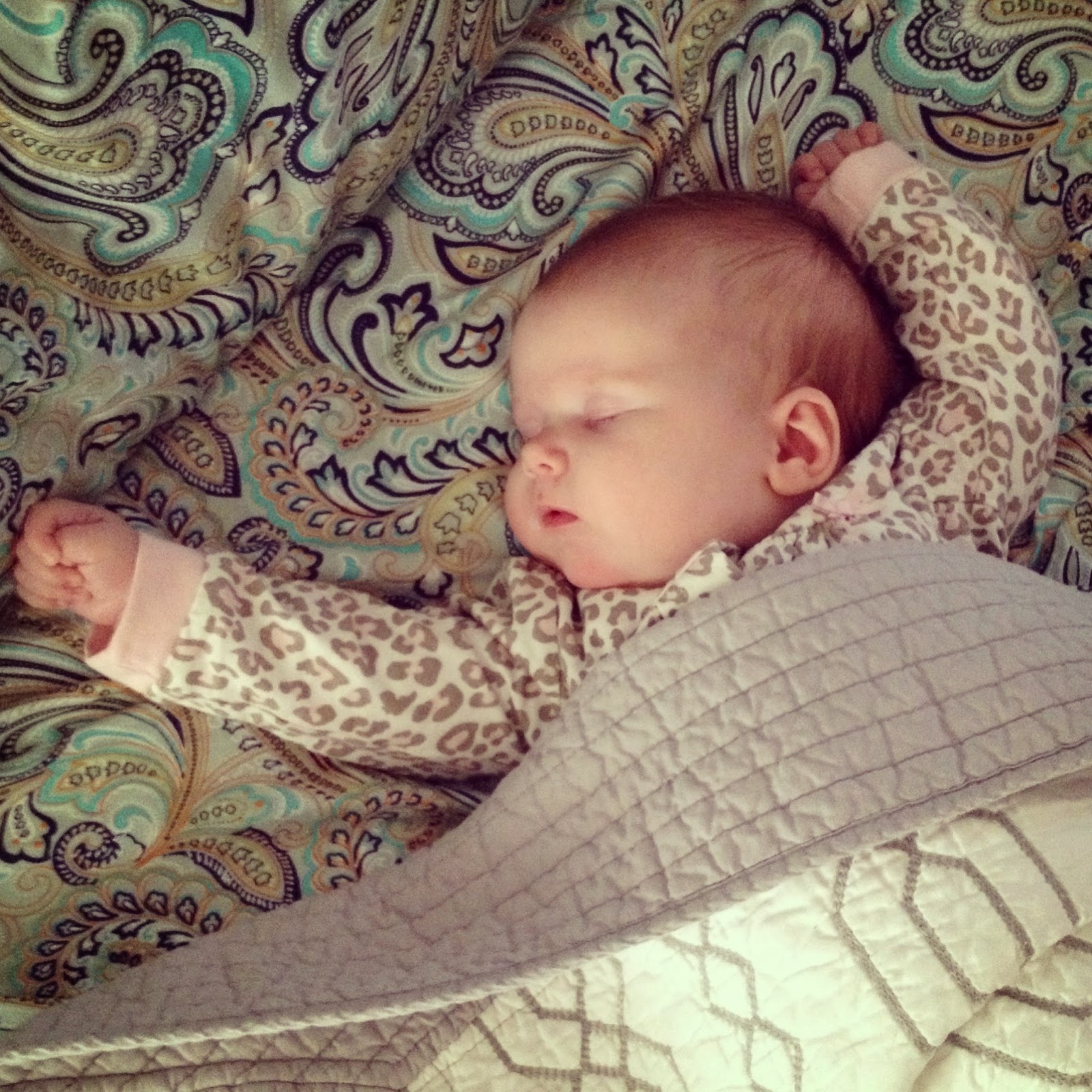 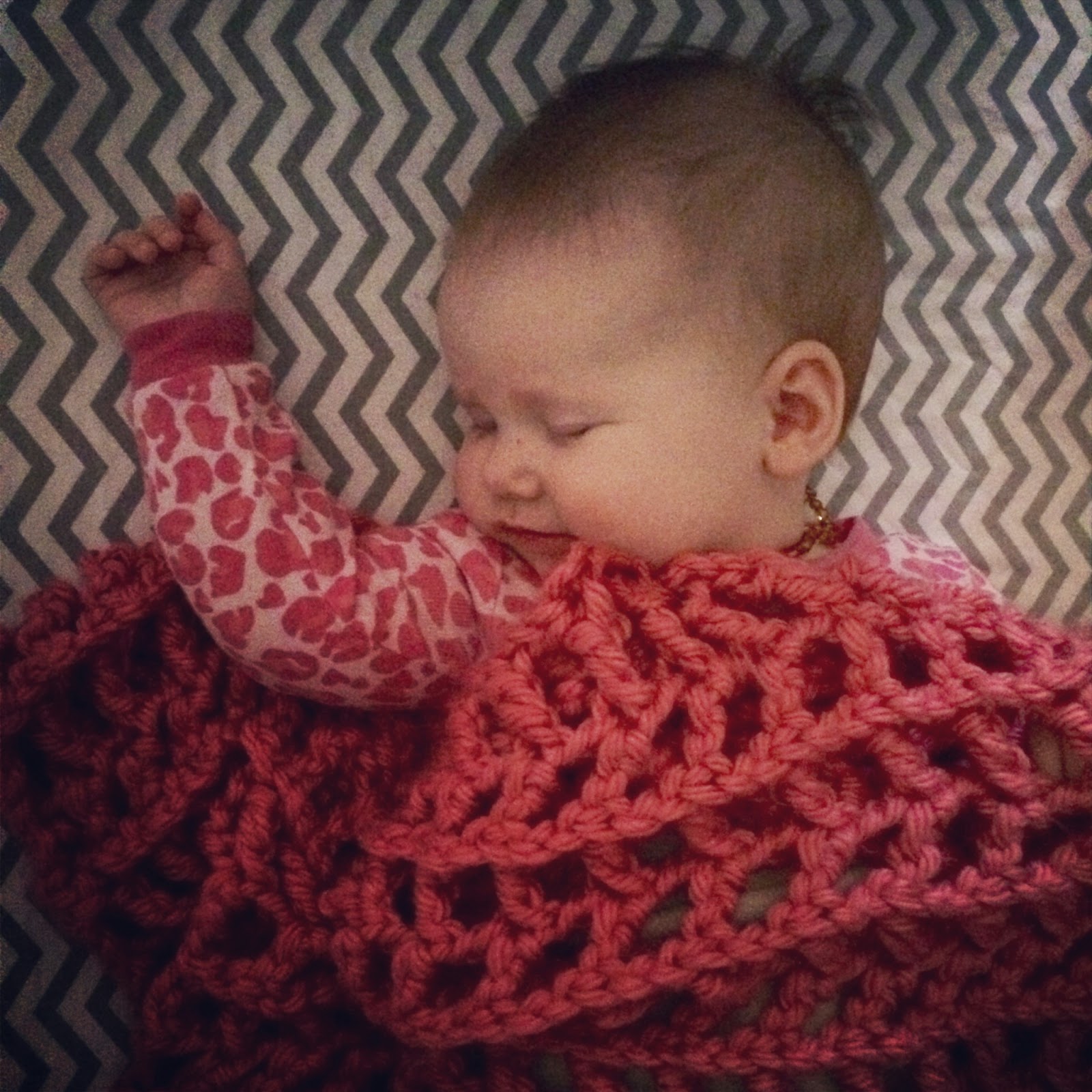 So is this method going to work for you? I don't know. The more strictly you follow all the guidelines, the greater success you will have. And the earlier you start, the better. It's harder to sleep train when a baby is six months or a year old, but it can be done. Studies show with proper training most babies sleep through the night by 3-4 months, and after that it gets a lot more unpredictable. I don't know what Baby #2 holds in store for me... I've heard some moms say they did Baby Wise easily with their firstborn and then their second baby refused to adapt. I've had other moms tell me there are no excuses and they've been able to sleep train three or four children - even some who were preemies, twins, had extreme dietary allergies, etc. I have other friends who have tried every method under the sun and still have babies who refuse to sleep. I do believe there are a small percentage of babies who will not be able to adapt to a sleep routine due to health problems, night terrors, or just their general wiring designed by the Good Lord. Grace to the parents of those children. But I think most babies can be trained to sleep, so I'm going to follow the method above with Baby #2 and pray that everything goes well.