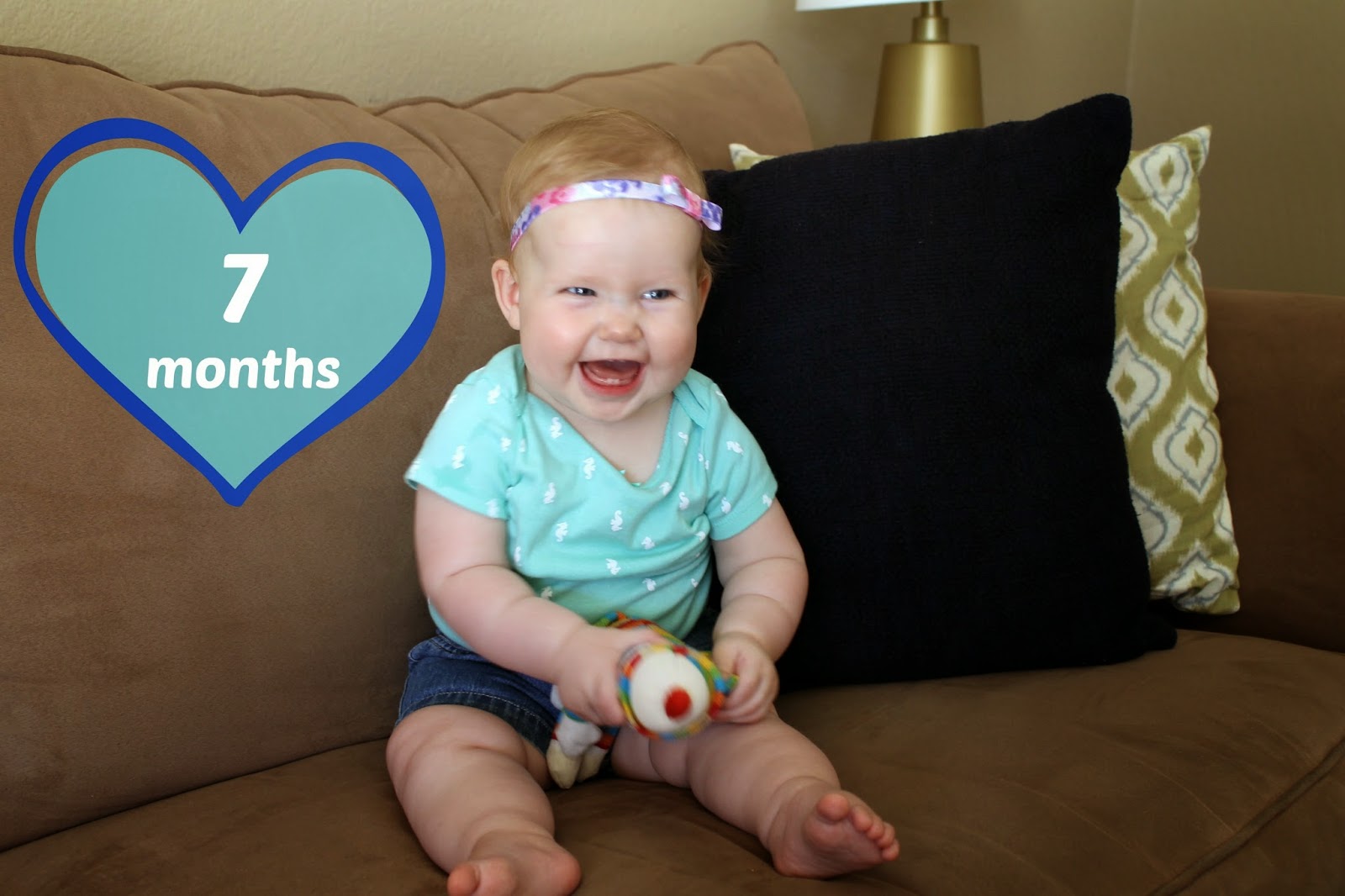 Growing // We had an unexpected doctor's appointment right around the seven month mark due to a sinus infection, and Z is weighing in right at 22 pounds. They didn't measure her height since it wasn't a well check, but I think she's probably surpassed 30 inches by this point.

Eating // Zianne is still nursing five times days, and we are consistently doing solids at breakfast and dinner. In the morning, I usually give her oatmeal, and in the evening I do some type of veggie. We tried a little bit of the baby-led weaning method and she choked on everything I gave her, which resulted in me almost having a heart attack. Therefore, we will stick with purees for a while longer. We do let her eat the little rice puffs though, which she loves. She grabs a handful at a time and then sticks her whole hand in her mouth in order to eat them. I've been a stickler about not letting Z have any fruit until she has proven she likes a wide range of veggies. However, she has more than once wiggled her little hands into the fruit basket, picked up a whole banana, and bit through the skin. One time she was hoarding a whole chunk of banana peel in her cheek like a squirrel and she wailed when I dug my finger in and took it out of her mouth. I guess we know what her favorite food is. I've since given up on my strict rules, and I share my banana with her at breakfast.

Sleeping // Zianne's sleeping is still great. She usually goes to bed between 8-9 and sleeps in until 7:30-8:30. She takes a morning nap from about 10-12, an afternoon nap from about 2:00-3:00, and sometimes a quick 30 minute nap around 5pm She's been skipping the third nap more often, and I think it helps her sleep a little bit longer at night. It's gotten so easy to put her down for naps. I literally change her diaper, put her in her sleep sack, and bounce her once or twice in my arms {mainly for bonding, not because she needs it}, and then set her in her crib where she puts her thumb in her mouth, rolls to her side, sticks her foot through a slat in the crib, and falls asleep. 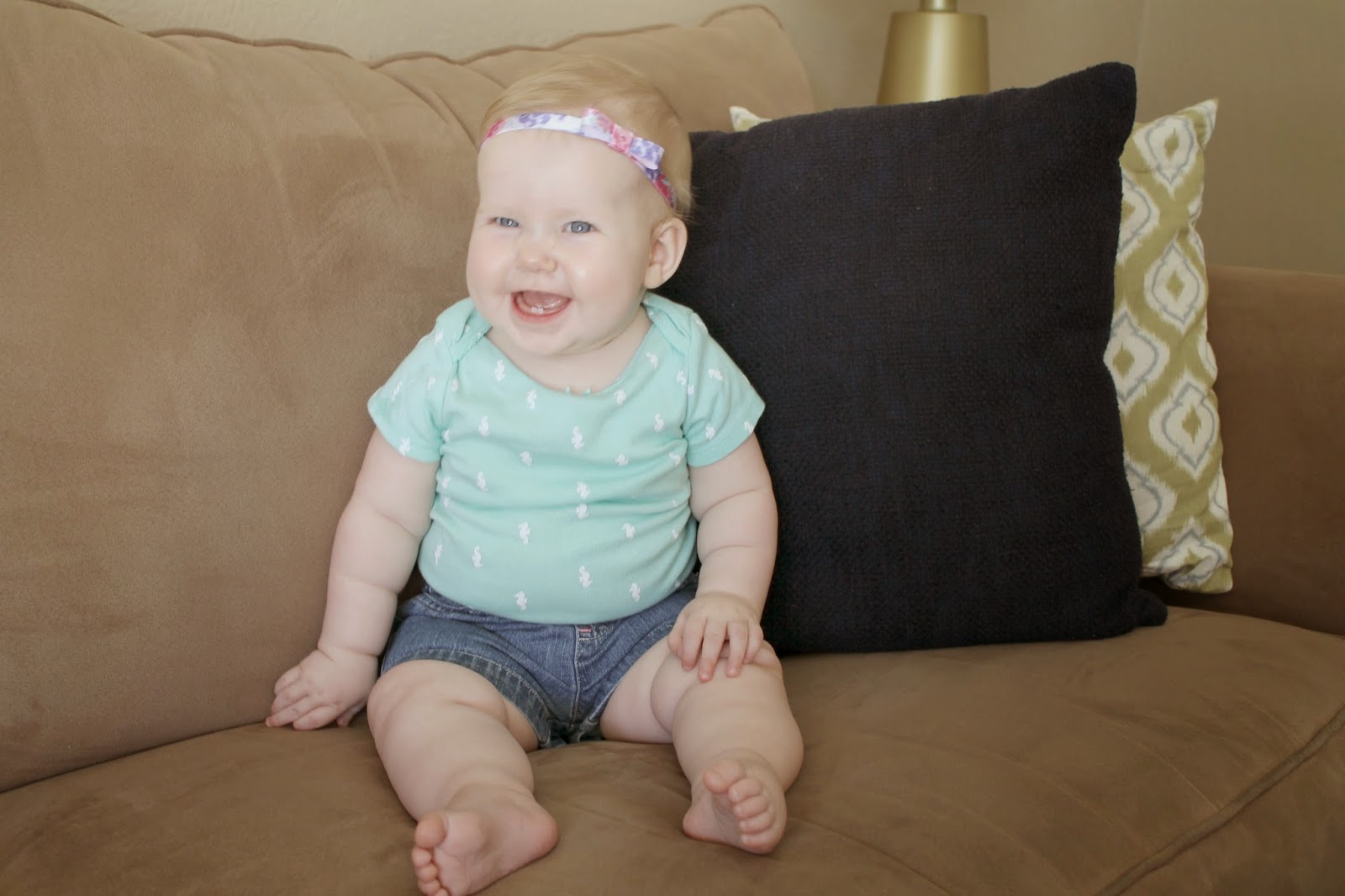 Wearing // I have officially packed up all the 12 month clothes and we are fully in 18 month. She has a little bit of growing room in them, which I appreciate. She has moved into 24 months for pajamas and swimsuits though.

Doing // Zianne easily sits up on her own now, and I love it so much. I can leave her on her own to play with toys while I get stuff done around the room. I truly hope she takes her time with crawling, because the sit-and-play-nicely-stage is so pleasant and easy! Zianne has also mastered waving, and she will wave at pretty much anybody on command. She has also started waving "bye bye" to inanimate objects. If I pick her up out of her crib, she'll turn and wave bye to her bed. If she's getting fussy in her exersaucer, and I get her out, she will wave goodbye to her toy. It's pretty funny. We also switched her car seat this month. She is so much more comfortable in her big girl seat. The only problem I foresee is that it gets so hot, since it sits in the car all day. We've already accidentally let the hot buckle hit her leg and she was not happy about it. She might just motivate us to get our garage cleaned out, so I can park the car in there...

Loving // Eating her puffs. We call them "puffers" and the girl could eat them all day long. She is not as interested in eating off a spoon anymore, because she thinks it's so awesome to feed herself. She also loves Freddie the Firefly {we put one in her Easter basket after she fell in love with the one at her friends' house} and chewing on the little foam books that are meant for the bathtub. She is also starting to get a favorite stuffed animal, a little rainbow colored sock monkey that we keep in our bedroom for her to play with when mom or dad are getting ready in the morning.

Loathing // It's always hard to write this section, because there's hardly anything our girl dislikes. She's still not a fan of having her face wiped, although she tolerates it better. She also doesn't really like eating or drinking anything cold, and she scrunches up her face if her food is too chilled. Also, we discovered last week that she has a BOY cousin who will be born in September, and every time we tell her it's a boy, she starts crying, which is hilarious. She basically never cries, so I guess she was really hoping for a girl

Daddy's girl // Micah and Z have been spending more and more time together lately. Now that he is off work earlier and her schedule is more predictable, I'm able to leave the house in the evening, and Zianne hangs with dad. He's learned that the best bet as she winds down to bedtime {aka melts down} is to keep her really stimulated, so she gets distracted from how tired she is. I came home last week, and he had her sitting in her chair in only a diaper, eating puffers like mad, and Micah was dancing and going crazy for her all over the room. Parenthood. There's nothing like it.

Mishaps and milestones // Zianne got her first sinus infection this month and had to take Amoxicillin. Part of me didn't want her to have to take antibiotics at such a young age, but the other part of me was like "Welcome to childhood, kid." The first dose of the bubble gum medicine seemed like a rite of passage of sorts. Zianne also had her first Easter, which she loved. We gave her a basket and her eyes lit up as she touched each gift. Micah's mom came to town, and Zianne was full of smiles all weekend. This was the first holiday that felt magical because we have a child. Zianne also finished her infant swim lessons this month, and graduated to the next class. The lessons aren't free anymore once they hit seven months, but Micah and I have been debating whether or not we want to pay for them, since she loves them so much and they are so good for safety reasons and brain development. 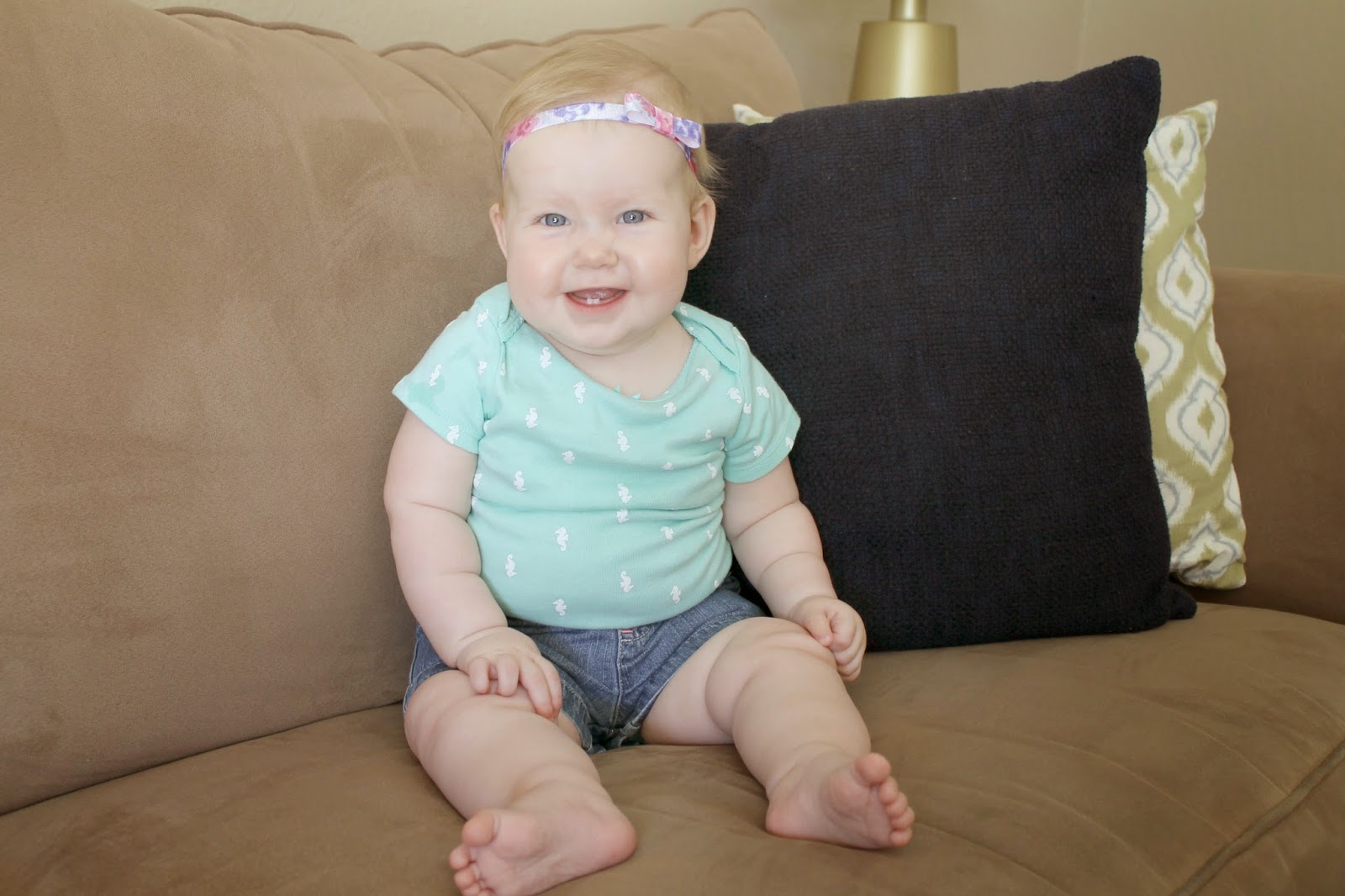 I have read your blog for a few years but rarely comment. I just love seeing your updates on Zianne. She is the cutest little chunk! I wish my little lady would beef up but she has stayed long and skinny. Anyway, I wanted to ask you what sort of training method or techniques you used for getting her to sleep so well at naps and bedtimes?

OH MY BANANAS!!!!! She is too funny grabbing and taking a bite of the banana. Mom, she obviously wanted some fruit in her belly. HAHAHAHA I love reading these updates and see her growing and developing. A lot of this sounds just like Kamden, especially the "loathing" comments. He's so happy and content, unless he's hungry or tired. But aren't we all?! Big hugs! xo, Nicole

So cute!! It's so interesting to read other monthly updates. Grayson will be 7 months on Friday and there are things he does that I guess Zianne doesn't (like getting ALL around the room!!!), but she seems ahead of him in a lot of other areas, like sleeping through the night and swim lessons! And he is only in 9 month clothes, which we thought was a big size for him! ha! Babies truly are individuals and I love it! :) She is adorable! PS - Grayson also had his first round of bubble gum medicine, much to my dismay, for an ear infection. :(

lucky momma that she is on a good sleeping schedule!!