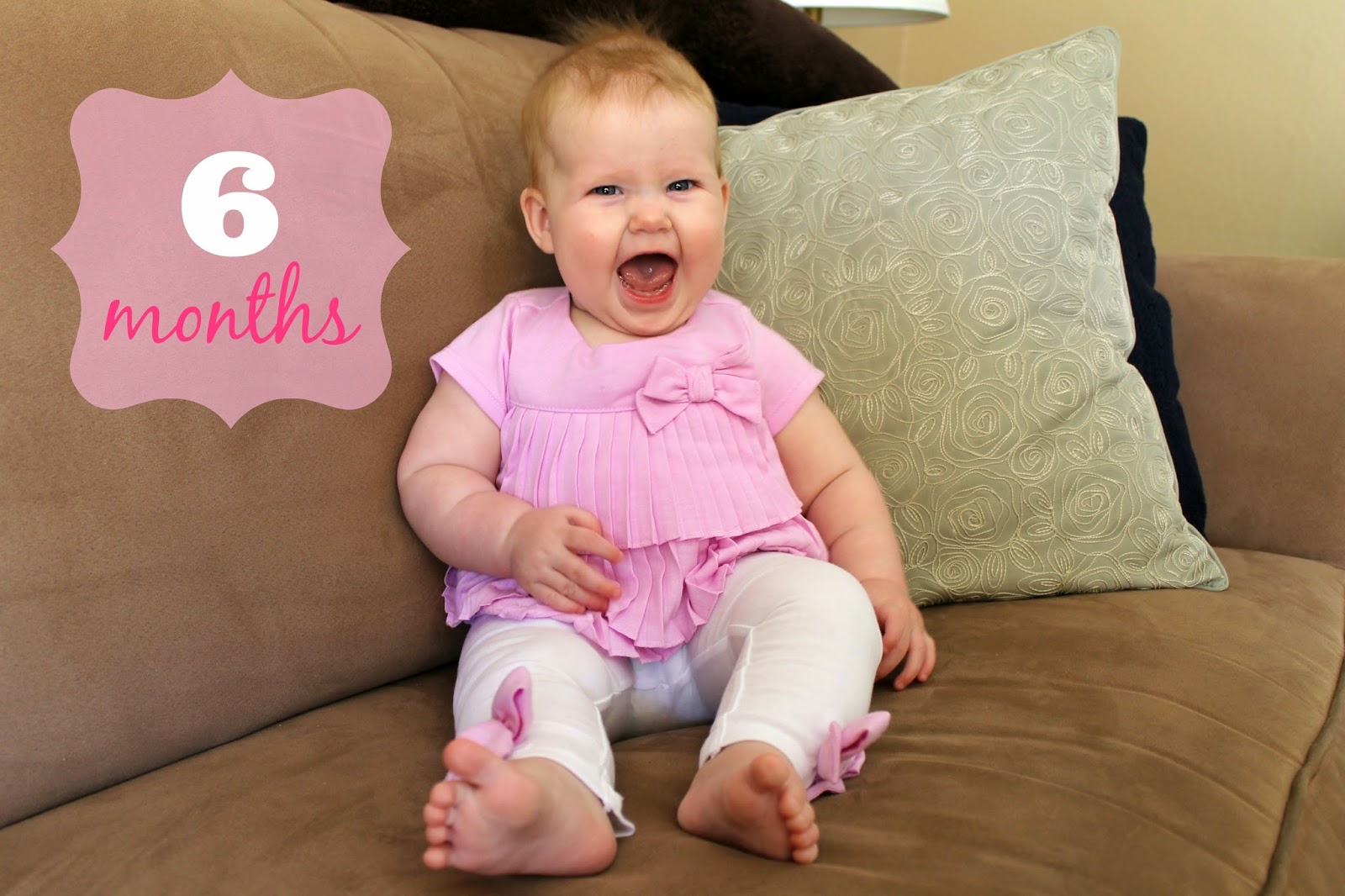 Growing // It seems Zianne is finally slowing down so all the other babies can catch up to her size. She gained four pounds between her 2 and 4 month well checks, but between 4 and 6 months she only gained a little over two pounds. She weighed in at 21 pounds, 5 ounces, and was 29 1/2 inches long.

Eating + Sleeping // Zianne is nursing five times days - in the morning, before bed at night, and after each of her three naps. We gave her some rice cereal the week before she officially turned six months and have introduced a few veggies since then. We are moving slowly with solids. She is still nursing really well and doesn't appear to be super hungry throughout the day, so I figure there is no need to rush giving her food. Her sleeping is great as well. She is still really consistent with a two hour morning nap, and she takes two shorter naps in the afternoon. It's harder to get her down for her "5 o'clock snooze" {as I call it}, but I've found if I just rock her for a minute or two and then put her in her crib around 4:45, she can actually fall asleep on her own despite her fussiness at this time. Zianne is still going to bed between 8-9pm and waking up around 8am. She's been getting up a little earlier recently - like 7:30 or 7:45 - but she's content to lie in her crib and suck her thumb with her eyes closed until I finish my quiet time and go in to scoop her up!
Wearing // One benefit to Z slowing down in her growth is that she is also slowing down in her clothing consumption. It's a relief to see Zianne actually get to wear the same outfit at least 3 or 4 times before she outgrows it. I honestly feel like all her 0-9 month clothes were such as waste, because they were worn once {or never!} before she was on to the next size. She is still wearing a few 12 month clothes, but mostly moving toward 18 month at this point.  She is also officially in size 4 diapers, and I think we'll be in this size for a while.

Doing // Zianne is on the verge of sitting up on her own. She can sit for 10 or 20 seconds without falling, but she's still not stable enough to leave her sitting up unattended. She has pretty much outgrown her infant carrier car seat. Although she hasn't surpassed the weigh limit, she is so long and large that the buckles barely click and the whole ordeal is just uncomfortable for mom and baby. We need to buy her big girl car seat ASAP. The only reason I delayed it this long is that I was waiting for her to be able to sit up, in order to go in a shopping cart. Zianne pushes up on her stomach quite well. The doctor said her little seal perch was that of a nine month old, but she's not showing any desire to crawl yet, and for that I'm thankful. She rolls around the room to get to toys she wants, but she hasn't shown any ability to get up on all fours yet. Take your time, sweet girl. We've also been introducing a few signs to her over the past few weeks... mainly "milk," "food," and "more." This has corresponded nicely to giving her solids. Most days I try to give her a little cereal for breakfast and a veggie at night while we eat dinner. If we are away from home, I skip solids, since she doesn't actually need the calories, but I'm trying to move slowly toward consistent meal times when we are at home.

Loving // The swing at the park. {She's gone on it a few times now and smiles and kicks the whole time.} Sitting in her stroller like a big girl. {We stopped using the infant carrier, and she's sits so contentedly on walks around the neighborhood and looks at her surroundings.} Eating with a spoon. {I don't think she really cares about solid food yet, but she thinks having a spoon put into her mouth is the coolest thing ever.} Clapping. {She doesn't understand how to clap on her own, but she loves watching other people do it.} Dancing to the oldies. {This has become a somewhat regular evening activity for the whole family.} Different textures. {Z's little hands love to reach out and touch different textures. She'll rub her fingers back and forth across blankets and throw pillows to feel which ones are soft and which ones have a rougher feel or a raised pattern on the fabric.}

Loathing // Zianne still doesn't like having clothing put over her face and she is getting more noticeably irritated when I try to clean her ears or nose.  She also does not like having her face wiped after eating. 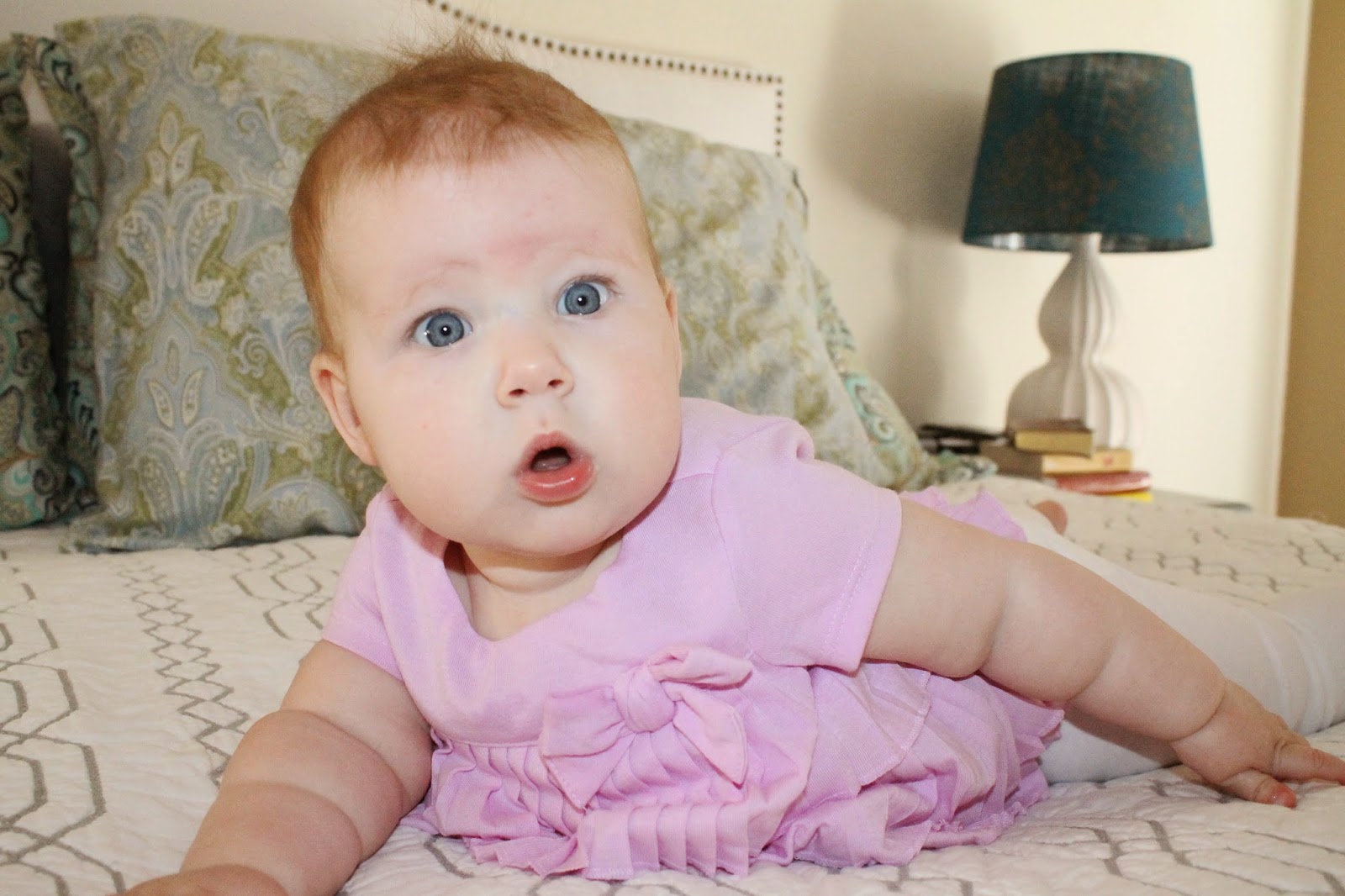 Daddy's girl // Now that Micah is getting off work earlier {his hours are weird in the winter}, he and Zianne are getting to spend more time together. Since we've stopped using the bulky car seat with the stroller, he's been taking her on runs around the neighborhood. They often stop at the park, and he pushes her on the swing, a little higher each time they go. When her face looks at him tentatively from the swing, as if to ask, "Is this too high, Daddy?" he smiles at her and she instantly relaxes and kicks her feet with glee.

Mishaps and milestones // This is most definitely my favorite age so far. I love that Zianne is so expressive and fun, but still can't crawl or walk, since I know those milestones mark a new season of exhaustion for parents.  Starting solids was a little bittersweet, since it's the first step toward weaning, and I know it's a marker that sends us hurling into the next half of a year, and suddenly I won't have a baby anymore. I'm excited to see Zianne crawl, walk, and talk, but I wouldn't be mad if we could freeze time at six months for a while.

My mom can't stop talking about Baby Z and how happy (and giant) she is! She said that Clara seems tiny now! I want to see her again...time to plan that family reunion!

Both of my boys started to slow down around 6 months. They were SO big as babies, which is the best, right?! But ya, they finally slowed down and started to fit in clothes that were the same as their age! Makes life a little easier.