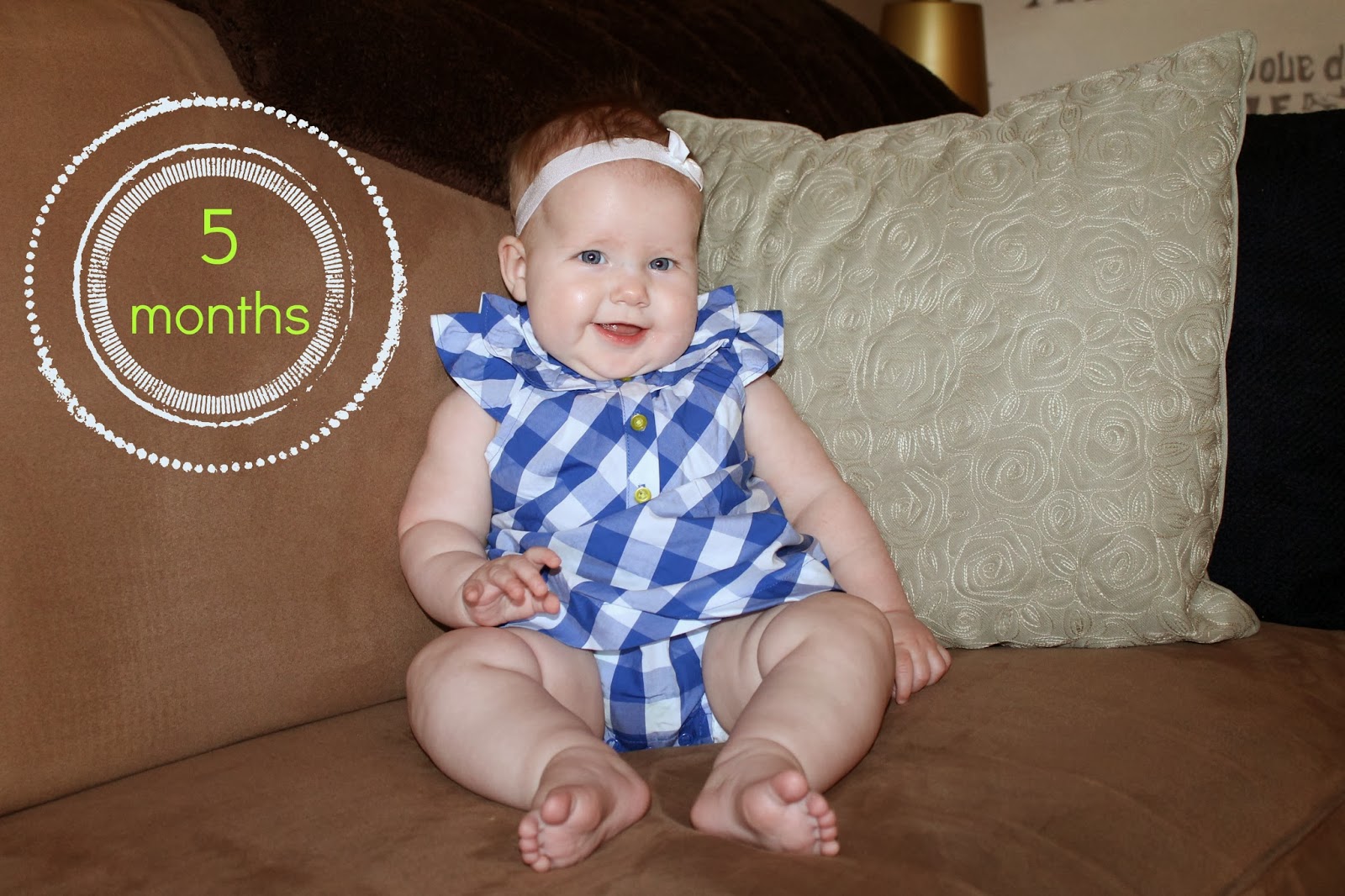 Growing // No well check this month, so I'm not exactly sure how big she is. My guess??? Around 21 pounds and just under 30 inches. I love my toddler-infant.

Eating + Sleeping // Zianne is still wavering between 5-6 feedings a day, depending on what our day looks like and how long she naps for. However, her naps are definitely becoming more consistent (usually 2-2.5 hours every morning, with two shorter naps in the afternoon), and we are moving toward a pretty typical five-feedings-a-day schedule. She usually wakes up between 8-8:30 {I trained her to sleep in!}, and I start her bedtime routine around 8-8:30 at night. She easily nurses for 45 minutes to an hour at night, so she isn't actually in her crib asleep until at least 9:00, but overall it's a great schedule that's working for the fam! And other than an off-week with teething {technically 8 days but who's counting?}, she's been sleeping through the night consistently since 10 weeks old!


Wearing // Zianne is in 12 month clothes and wearing some 18 month. I am about to finish up a box of Size 3 diapers, and then I'm going to move to Size 4. Technically, she is just under the weight for them, but three blowouts in two days last week convinced me we should switch. I feel like I was late transitioning her up for all the other diaper sizes, so this time we are going to make the change early.

Doing // At Z's four month appointment, her doctor gave me the heads up on all her upcoming milestones. He said she should be rolling over soon, and she might start cutting teeth anytime between 4-12 months. The very next day she rolled from stomach to back. The day after that she rolled from her back to her stomach. The next day she started acting cranky. The next day I could feel a tooth under her gums. The following day it popped through and the next tooth broke through a few days later. It was the same day that I could feel her tooth that she stopped sleeping through the night. For eight days straight, she was up once, usually twice, and sometimes three times a night, in pain. And they were really sporadic wakings, usually close together, so as soon as I fell back asleep from getting up to soothe her, she would wake up again. Also, we both got a cold that week, so the lack of sleep was especially not fun. But then I found the cure... lavender oil on the bottoms of her feet... I've become a sometimes-hippie and I'm never turning back. In other news, Zianne is becoming more mobile, strong, and alert. She can pick up her toys, even some surprisingly heavy ones. She enjoys her play mat, activity center, and sitting in her Bebe Pod chair for increasingly longer periods of time. And she fully knows how to laugh now. She still sounds like an old man chuckling, but she will laugh her head off if we laugh loudly at her or if we bounce her up and down. Also, over the past few weeks we've weaned completely off the swaddle and into a fleece sleep sack. However, since it's already a bajillion degrees here, I need to get her a lightweight sleep sack pronto.

Loving // Sophie the Giraffe. Her weird teething toys {Micah thought they were a waste of money, but she loves them}. Spinning her Wonder Wheel. Sucking her fingers upside down by day and sucking her thumb to put herself to sleep. Her first ball. Watching mom cook dinner while listening to country music. The girl loves T. Swift.

Loathing // Being on her stomach to play. She rolls instantly onto her back, now that she can. Not getting attention. Like a typical firstborn, she likes for people to pay attention to her at all times. Getting dressed. She is not a fan of anything that has to be pulled over her head these days. 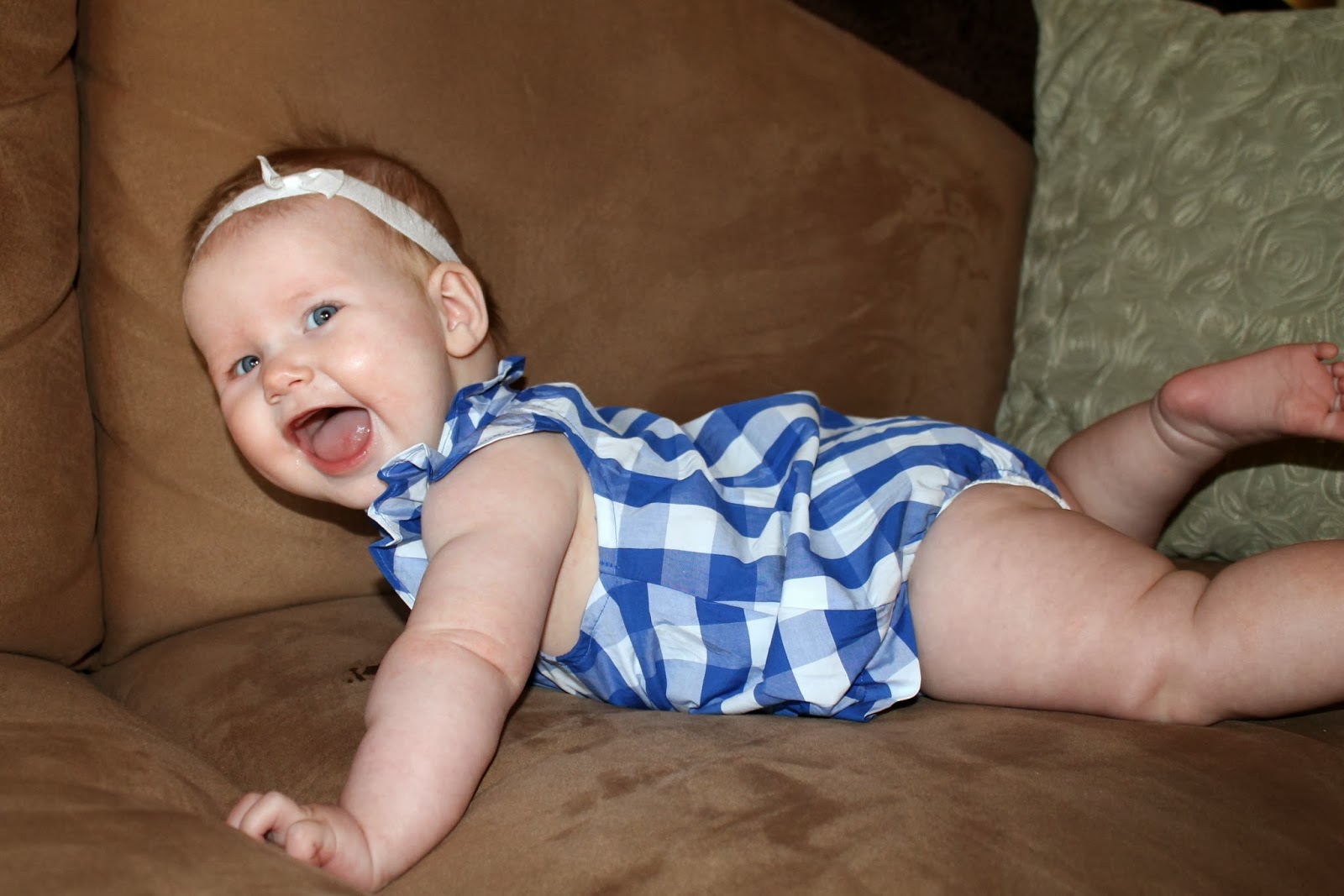 Daddy's girl // Sadly, Micah doesn't get to see Z much on weekdays. Usually he gets her out of her crib in the morning and she is all smiles before he leaves for work. By the time he gets home at night, she is slipping into her cranky, tired mode. Some people call this the "witching hour," but I always think of it as the "long march to bedtime." Thankfully, Micah's found a new activity to keep her entertained during this time. He holds her and they run, literally, to every mirror in the house. When they get to each one, they stop, stare, and he says "Look! It's dad and Z!" and then they go running to the next mirror. Thanks to the fact that our house boasts original 1979 mirrored closet doors, they stay entertained by this game for quite some time. Micah's work hours switch next week and he will be home earlier, so hopefully he and Zianne can spend some quality, less meltdown-like time together in the evenings.

Mishaps and milestones // Another sweet milestone this month... Zianne now reaches for me to pick her up. It started as the mildest reflex... her arms would twitch upward just a little bit when she wanted me to grab her, but now it's a full-on reach and ever so cute. I often stand over her and say "up" and she'll reach out her arms to me. Other than teething and a cold, we didn't really have any mishaps this month... except that Micah and I got to go on a long-awaited date night while my parents watched Z and when we dropped her off I realized I forgot to bring milk for her. Ugh. I wanted to cry, but my parents are awesome and drove all the way back to our house to pick up our child's food supply, so we could still go on our date. Bless them.

JEN!!!!!! Oh my swooning stars, Z's looking more precious every single day. Those eyes! Those legs! I know I repeat this like a broken record, but she's beautiful. Kamden has a 'long march to bedtime' some nights too, especially if his daytime sleep has been shortened. I swear the kid is going to sleep his life away though, he began sleeping through the night (for the most part he sleeps 7-9 hours straight) at eight weeks. Once in a blue moon, he'll wake up for an extra-early morning feeding but go right back to sleep. I'm not looking forward to his first round of immunization injections, but I'm excited to get him to the pedi's office to weigh/measure the little man. He's grown so much since we were there last!!!!!

What a cutie! She is getting so big! :) I hear ya on the whole diaper thing! Once they've had one (or five) blowouts, I like to move them up to the next size to make them stop! One baby I keep during the week has had five in three days. I mid you not. This boy needs him some bigger diapers. Ha.

I am sure you are loving your time with Z! She looks so very happy and of course, adorable!

she is so cute!!! i am convinced no babies like tummy time.

That gingham outfit is too cute!