It's been a while since we've had a crazy Arizona adventure story on the ol' blog. It is time, my friends.

So yesterday, as you probably know, was Labor Day. Since there was no actual labor happening {in the childbirth sense, of course}, it was more of a frantically-get-projects-done-around-the-house-before-the-baby-actually-arrives type of day.

However, if you've read about the state of my hip lately, I can only handle physically straining tasks in moderation. So after finishing painting a dresser on Monday morning, I had to rest on the couch for a bit to ice my hip and prop up my cankles. True story. I am pathetic. But icing my hip helps so much, and I am walking better than I have in weeks.

Meanwhile, my sweet husband headed out to the backyard to tear out some horrible overgrown ivy that sheds into our pool. These are the joys of buying a house that was vacant for over a year before you moved in. I watched through the sliding glass door as Micah wrestled with nasty bug-ridden overgrowth in the sweltering heat, and my main thought was "cleaning the bathroom every week isn't so bad compared to yard work." Amen. 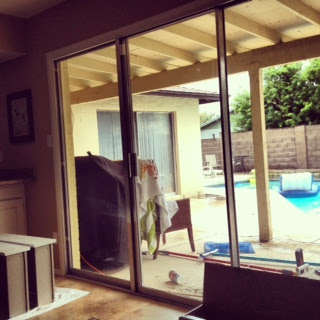 Where it all happened...

Suddenly though, the weather took a turn. The sunny skies became gray, and I started to hear thunder in the distance. My freshly painted dresser was still sitting outside on the patio, so I called to Micah and we rushed it indoors just as the first raindrops started to fall. After such a sudden expense of energy, I returned to the couch to recuperate, while Micah pulled his tools under the cover of our back patio to wait out the storm.

Knowing this crazy desert rain storm would probably pass in a few minutes, Micah sat down on one of our patio chairs to wait it out. However, the rain didn't let up right away as expected, so Micah decided he should come inside, but first he needed to unplug the electric trimmer he had been using. He caught my eye when he got up, and this is what I saw happen next...

Micah took a step toward the back wall of our house and reached down to unplug his trimmer. Suddenly there was a sideways flash of lightning that looked like it was directed straight at our house. Instantly, there was the loudest clap of thunder I've ever heard. If the amount of time between the lightning and the thunder is really an indication of how far away the lightning is... then it was most definitely RIGHT ON TOP OF US. Next, I saw my always-fearless, adventurous, manly-man husband nearly jump out of his skin, and then turn hastily for the sliding glass door.

Micah ran through the door and yelled "Did I get hit?!" I looked at him dumbfounded, because I seriously could not tell if he had been hit. And here it must be noted that Micah was wearing quite the outfit during this escapade. Imagine, if you will... board shorts on bottom, so he could hop in the pool if the heat got to be too much during his project. But on top, a hoodie, because he was dealing with cutting down the nastiest debris and needed his arms and back covered. On his head, a black cowboy hat, to keep all the -ish out of his eyes. And, to top it off, a painters's mask, to prevent him from inhaling the dust, leaves, and bugs falling out of the sick ivy. And I should probably mention, just so you can get the full picture, he was wearing mismatched sandals. The day before, one of his Reef flip flops purchased three years ago decided to break on the SAME day as a pair of Nike flip flops he has had since high school. Thankfully, the opposite foot of each shoe broke, so he was wearing one of each to finish up his yard work. Needless to say, when he asked me to visually assess his health, all I could see were his startled eyes beneath his hat and above his mask, and so I sat there silent. His next question was "Am I glowing?!"

It turns out that as he reached for the outlet, Micah actually saw a bolt of lightening go into the wall. As in he saw a tiny line of bright light just two inches from his fingertips... and thankfully, he escaped being hit. In other news, random electric outlets all over our house no longer work, including the one in our bathroom that I use to dry and straighten my hair. Good thing I'm 38 weeks pregnant and have really low expectations for my beauty routine right now.

And this is what we've learned after this grand adventure...
1) It looks like we got life insurance just in time. We would have paid $10 for our first month and really reaped in the cash if the lightning had zapped him. {This was Micah's joke, not mine. I'm not heartless.}
2) Even when working in the yard, choose your clothing carefully. Because if you get struck by lightning, you might have on the world's most hilarious outfit when the coroner and the nightly news camera men show up to get footage of your misfortune.
3) God is good and our baby will most likely get to meet its earthly father, assuming we have no other near-death experiences in the next few weeks.
4) If he had been struck, I like to think Micah would have survived but lived the rest of his life with a Harry Potter-esque lightning scar on his forehead... and it would have been awesome.

HAHAHAHAHAHAHAHA Poor Micah, I'm really glad he's okay (lightning and thunder and storms are not funny business and I take them seriously having been in two tornadoes myself) but I really, really, REALLY wish you had gotten a picture of his outfit. Between the cowboy hat and mismatched flip flops, I know the runways of Paris and Milan and New York are going to be rocking his style in the near future. LOL

Baby Russum, you have no idea the awesome adventure that awaits you outside your mother's womb. Get ready, Kid, it's going to be a good time!!!!!

Oh my! I'm so glad Micah is okay. That must have been so scary at the time.

And thanks for the lesson. I need to keep that in mind since I let my dog out just before a thunderstorm yesterday morning in my nighty (not something I'd want to be photographed in).

I told Ben what happened when you posted it on twitter and his response was, "Woah. Did he pee his pants??"

This is the best post I've ever read. AND p,ease tell Micah I read it out loud to Josh who "giggled" the whole time. Our hubbys love each other. The end.

Bahaha! Ohhhhhh my! I'm sitting here snickering at my desk. Once you said cowboy hat it was over for me. Oh men and their attire selections. Glad everything turned out OK. I one time got electrocuted by an outlet in Puerto Vallarta. All it took for me was unplugging a hair dryer from the wall with a hand that was wearing a silver Tiffany's bracelet. I was fine but my arm was achy and my bracelet actually melted a little. My brother-in-law told be metal is a conductor (DUH!) but who knew that a bracelet could get me zapped. LOL! Long story to say that you can be zapped and survive...lighting however I don't know about. ;)

Oh my heck! This terrifyingly hilarious. Your descriptions helped me envision the scenario. Haha!

The lightning lately has been insane! Glad all ended well.

The description of his outfit had me rolling! I mean what are the odds of both of your flip flops breaking on the same day... thankful he wasn't struck!