As of this past Monday, I am on a sabbatical from running. If you follow me on Instagram {@jenrussum}, you know that I have run consistently throughout my pregnancy, but Monday, August 12th {exactly one month before my due date} was my last run with this baby in utero.

Since I've had such a healthy pregnancy and have been able to work out consistently and moderately for the past eight months, I thought I would write a post on what workouts have looked like for me during pregnancy, in case you are looking for guidance in this area.

But, first, a few disclaimers:

1) While a lot of people think I'm really tough for running during pregnancy, I actually don't think it's that big of a deal. I have been able to run because God blessed me with a healthy and easy pregnancy, and it was fairly simple to keep up with routines I already had before getting pregnant. I truly think the strongest women are those who battle with constant sickness while pregnant or have to endure bed rest - and they do so with JOY. I could not do that. I would have the worst attitude and probably cry all the time if I were puking or bedridden and so the Lord did not tempt me beyond what I could bear. I don't think I could have a tough pregnancy and not sin. The Lord knows me. Amen.

2) I am also not a RUNNER. My workouts are nothing compared to what some women do while pregnant. I have friends who have run half marathons at six months. My cousin ran her last race two weeks before her due date. Although I have run a couple of half marathons, I would never be motivated to do such a thing while pregnant. I am a "run 2-4 miles three to four times a week" girl. I am a "don't even take my running shoes on vacation because you KNOW I'm taking the week off" kind of girl. I write this for those of you like me. You like to exercise. You try to consistently do cardio and/or weights at least three days a week. But you are not obsessed. You don't have the perfect body, but you strive to be healthy within reason. This is for you.

3) I am also not a fast runner. I would say my normal pace for a three mile run (5K) is between 9-10 minutes, usually hovering around 9:30. If I run longer than three-ish miles, my pace creeps closer to 10 minute miles, and I have run many races slower than a 10 minute mile pace. Since I feel like a lot of women fall into the 9-11 minute mile camp, I hope my workouts can give you a bit of clarity as you plan your own.

Overall: Throughout my pregnancy, I have been able to run and lift weights at least three days a week. Along with that I have also eaten pretty moderately and healthy, not because I am super disciplined, but because I've found that eating too much or eating greasy food makes me feel horrible - like stomach-ache for 24 hours horrible. The digestive system during pregnancy is a strange thing... and should not be messed with! 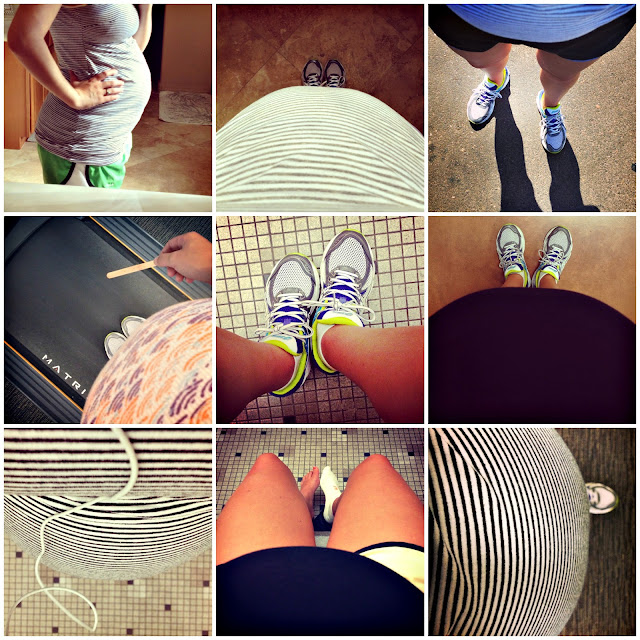 Here's a break down of what my workouts have looked like since I found out I was pregnant in January:

Weeks 0-14: The first few weeks of my pregnancy I didn't work out due to Christmas and traveling. When I finally got back to the gym the second week of January, I had no idea I was 4.5 weeks pregnant. I just thought I would have to get my booty in gear to overcome the past month of traveling abroad, Christmas goodies, and wedding festivities. I started running 2.5 miles at a time at just under a 10 minute mile pace, trying to work my way back up to my normal 3.1 mile runs. When I discovered I was pregnant a week later, I continued running, but I no longer ran longer than 2.5 miles or 25 minutes and my pace was approximately 9:45 per mile.

Weeks 15-25: As my bump began growing, running became more difficult. I cut my running to two miles each time and slowed my pace to 10 minute miles (6mph).

Weeks 26-31: The last time I ran two miles was at 25w1d. It was a Friday. I ran my normal two miles in the afternoon and went to a friend's house that evening for game night. My back was a little sore after my run and by the time we were playing games that night I could barely walk. It was a one-time occurrence and may not have been related to running, but I cut my running down to 1.5 miles after that and I slowed my pace to about 10:30 minute miles (between 5.3 and 5.8 mph). I found that my back would start to hurt after running 18-20 minutes, so I never ran more than 16 minutes after 25 weeks and I didn't have any more back problems.

Weeks 31-35: Just before I hit 32 weeks, we went on vacation for 10 days. I ran the day before we left, thinking it would probably be my last run of pregnancy. I ran my normal 1.5 miles hard and joyfully and was ready to surrender running for the next four months. However, while we were visiting Washington, Micah asked if I would go for a run with him through my parents' neighborhood. I agreed, but told him I would probably only go a mile. I ran a mile and it felt good, so I decided I would keep running for a few weeks when we got back from our trip. Since week 33, I have run 1 mile at a time, three days a week at approximately a 10:45/mile pace. This means it takes about 11 minutes to run a mile and then I walk incline afterward for 4-9 minutes.

Weeks 36-40: My plan it to keep walking incline on the treadmill for at least 20 minutes at a time 3-4 days a week until this baby is born.

Weights: I have also consistently lifted weights throughout my pregnancy, mostly using machines and free weights at the gym, and alternating between my legs, arms, and back/shoulders. I tend to work out my legs a bit more than my arms and back, only because I am most concerned with weight gain in my legs and hips during pregnancy. I figure my arms will get toned naturally when I'm hauling around an infant car seat for the next six months. My doctor said not to lift weights above 45 pounds while pregnant. I was told I could still do squats and lunges, but not with any extra weight in addition to my own body weight. I did lunges until about 20 weeks, and then quit for fear of injuring my hips, back, or groin as the weight of the baby increased on my pelvic area. Also, I tried to obey the 45 pound rule, but I made an exception when using the leg curl/hamstring machine. 45 pounds was way too little weight for me, so I would do 60-70 pounds just for that one exercise.

Reflections: Working out during pregnancy is totally safe and advised by doctors, unless you have extenuating circumstances. Listen to your doctor and your own body. I have some friends who were told to quit running during their 1st trimester and then were able to pick it back up again when they hit 14 weeks. Definitely do whatever your doctor recommends. And if you are given the all-clear for exercise, listen to your body. When I couldn't walk after my 25 week run, I knew my body was telling me that I was pushing it too hard. During my last two runs, last Friday and this past Monday, I could feel the baby moving as I ran and it felt uncomfortable. Up until 35 weeks, I NEVER once felt the baby move during a work out, which indicated to me that my moderate workouts were soothing to the baby and it would sleep through them. During my last two runs, I felt like the baby might be uncomfortable and so I've quit running to keep this little one safe {and avoid early labor!}.

Also, some people say the your heart rate should not increase above 140 beats per minute while pregnant. The concern with a raised heartbeat is that it also raises the baby's, which is already about double your own. However, most doctors disregard the 140 bpm recommendation and instead suggest that you continue to do the types of physical activity your body was used to before pregnancy, as long as your body doesn't show any signs of discomfort or distress. I found that if I never ran longer than 25 minutes while pregnant, my heart rate would get up into the 160s, but it would drop below 140 within TWO minutes of my cool down walking after my run. Since my own heart beat and the baby's were only elevated for a very short amount of time, I felt completely safe running. If you weren't running at ALL before pregnancy, you probably shouldn't start, but you should still regularly exercise {walk, swim, etc.} while pregnant.

One of my goals in pregnancy was to run until 20 weeks. When I achieved that goal fairly easily I began setting new goals for myself: running until 25 weeks, 30 weeks, July 12th {two months before due date} and finally August 12th. While I'm glad I exceeded my goals, I also would have given up running at anytime for the health of the baby and my own safety. I definitely encourage running during pregnancy, IF you were already running before you got pregnant, but I also encourage you to hold working out with a loose grip so you can give it up easily if it's best for you and your child.

Workout clothes: Looking at the pictures above, I thought I would share my maternity work out clothes as well. I pretty much made it through 3-4 workouts per week with the following:

Good job girl! You will be so happy you stayed as active as you did! Glad you were able to "beat" your running goal during pregnancy!

That's awesome! I got into running a few years ago, not very seriously, but I actually started enjoying it. Then I was doing some hardcore bootcamps along side it but life got crazy and I stopped for about 6 months before finding out I was pregnant. Then, I was SO tired in my first trimester, going upstairs was a workout and my doctor didn't want me working out that intensely after such a long break from it. Good for you pushing through that! I wish I could have! Now that our jogging stroller is here (but baby is still 6 weeks away) I am itching to get out there!

I am no where near pregnancy but I enjoyed hearing how you ran during yours. I really enjoy running now and I'd like to think that I will continue to over time. It's cool to hear how you were able to keep it up.

I love those nike tempo shorts too...big question, where have you found, or when maybe, is the best place/time to buy them? Reasonably price wise? I'd love to own more than my current 2 but can't seem to allow myself to buy $30 shorts often.

Congrats and what a great recap of your pregnancy workouts! All the best and hope the last month goes smoothly.