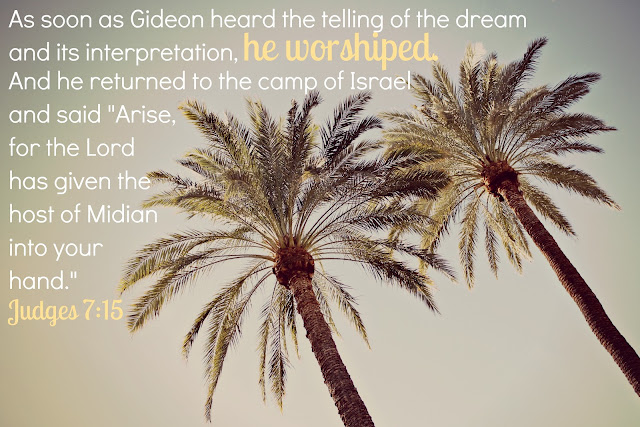 God has called Gideon to defeat the pagan Midianites. When God first commands Gideon to go into battle, he takes 32,000 soldiers with him. But God wants glory for the victory. He wants the defeat of the Midianites to be impressive and miraculous, so that everyone will know it happened only by the strength and hand of the Lord. All good things happen only by the hand of the Lord, but God wanted to make it very obvious in this instance. So through a series of circumstances, God sends all but 300 of the 32,000 soldiers home. Gideon and his minuscule army will defeat an enemy camp because God is on their side.

But just to give Gideon confidence of His plan, God sends Gideon down to spy on the enemy camp before the battle. He promises to give Gideon assurance of victory by what he hears there...

And assurance is exactly what Gideon receives when he overhears one Midianite soldier tell another about a dream he had. In the dream, a cake of barley tumbles into the camp and turns a tent upside down and flattens it. The comrade gives an interpretation of the dream in Gideon's hearing. The dream means that Gideon will overturn all the camp, because it has been given to him by the hand of God.

And then what Gideon does next is peculiar...


He doesn't go straight to battle.


Gideon pauses right there, as he is eavesdropping on enemy territory... and he worships God. He doesn't run back to his troops and hastily attack because of what God has promised. He stops first and worships the One who will bring victory about.

But if I were Gideon, would I pause? Do I pause throughout my day? Throughout my plans, even when they are blessed and ordained by the Lord?

Do I pause to thank God as I carry out His plans and calling on my life?

Do I pause to praise the one who upholds all things by His hand?

Do I stop for a second before I run toward to next big thing? Before I eagerly move forward to use God's gifts for His glory?

Gideon's battle was ordained by the Lord. God had called him to the task. But Gideon's pause was appropriate. Before running back to retrieve his own men and attack the enemy, he stopped to acknowledge the Lord's hand in it all. To thank Him for His goodness.

I want to be a woman who is willing to pause. Who delights to stop for a moment here and there to praise the Lord who fills my day with tasks and relationships and responsibilities. The Lord's plans for my life are good. And it is good that I am eager to use my gifts and my resources for the Kingdom of God. But in doing so, I hope I don't forget to pause and praise the King.

I loved this post! I often feel in a hurry to get things done for God but than I don't pause to praise him for the idea, the circumstance, the opportunity, everything that He has done and given me. This is an excellent reminder and challenge to stop and worship God.

I'm hosting a giveaway - would love for you to enter!

What a great reminder! This really made me stop and think! Thanks for sharing! :)

Last week, I listened to a sermon by Dr. David Jeremiah regarding Gideon. It was full of so much goodness that I listed two times. Today, I listed to the second half. So much to learn from Gideon's life. Thanks for sharing!!!