So this past weekend Micah and I took a little getaway to San Diego. I posted some Instagrams here and will do a full post about our trip next week, but right now I just want to talk about the best date I've ever been on {which happened while we were there} and what God taught me during it...

We ended up in San Diego because of Micah's job and we turned it into an extended weekend to celebrate his 30th birthday. After his work meetings ended on Saturday afternoon, I asked if we could go to Coronado Island. I had never been there before and heard it's one of the best things to do in the city. Micah kindly obliged and we drove over to the island.

It was about 4pm and the sun was just starting to drop over the city...

We arrived to the island not knowing anything, except that there was a big fancy hotel somewhere and that many people recommended renting bikes there. We decided we would check out the bike rentals. As we were walking toward the shop, a couple came around the corner and rode past us on a bicycle built for two. Without even thinking, I yelled out, "Micah, can we get one of those!?!?" I have never really dreamed of riding a tandem bicycle, but in that moment it seemed like the most exciting thing in the world. Ten minutes and twenty dollars later, Micah and I were off on a sunset ride around the island, sharing a tandem bicycle.

I am, quite honestly, not the best bike rider. I have been known to take some bad tumbles on bikes and it's definitely not my favorite recreational activity. And, at first, riding a bicycle built for two was not easy. I felt wobbly and like I was lacking control since I was on the back seat...

But let me tell you, this ended up being my favorite bike ride ever, because I learned a few things along the way. As I got used to riding behind Micah and following his lead on the pedals, I realized that riding a tandem bicycle is the perfect analogy of how a marriage works.

1) Micah and I have only ever ridden on solo bikes. We are both used to be being the only driver and deciding where the bike goes and how fast or slow it gets there. However, on this ride I gave up my own bike and decided to share a bike with Micah. I climbed onto the backseat and let him lead me around a beautiful island at sunset. I can't imagine a more accurate picture of how two become one in marriage. 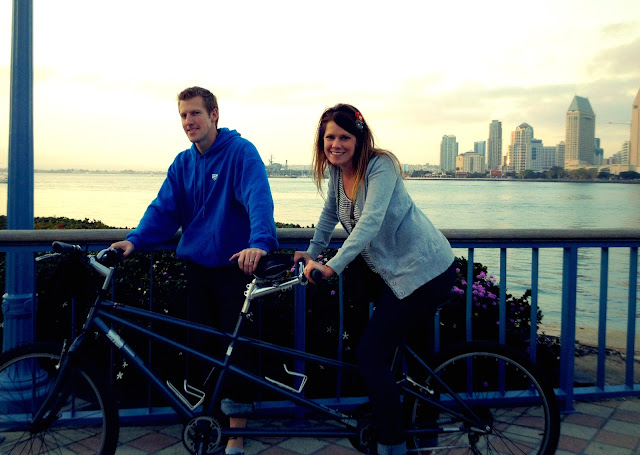 Therefore a man shall leave his father and his mother and hold fast to his wife,
and they shall become one flesh.
Genesis 2:24

2) I realized I didn't really want the front seat. As much as it might have been fun to be the main driver on the bike {and Micah even offered to let me take a turn}, I would not have been as good at controlling it as Micah was. His strong leg muscles were much better at leading us on our journey and I didn't really want to be responsible for keeping us safe and maneuvering down unknown streets and in between wandering tourists. This reminds me of how the husband is ultimately responsible for his wife and family before God. Of course, I am called to godliness and strive to be a good wife, but in the end, I am thankful that Micah leads me and is accountable to Lord for the state of our family. 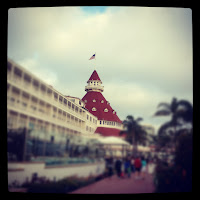 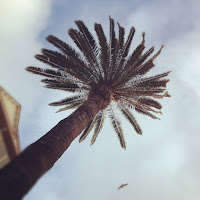 3) Don't fight for control. On the back seat, it was my job to match Micah's movements. If he pedaled faster or slower, I needed to do the same. If he told me we were coming to a stop, I needed to slow down my pedaling. If I tried too hard to pedal at my own speed, my feet would get caught and I had the potential of causing us to fall... much like a woman who fights for too much control in her marriage can bring about destruction.

4) Micah lovingly listened to his backseat mate. Although Micah had more control of the bike than I did, he still needed my assistance. He was appreciative of my leg power as we went up slight inclines and he listened to my voice when I realized we were going the wrong way and needed to turn around. He wasn't some crazy dictator on a bike, but encouraged me to go faster when needed and was willing to slow down when I asked. 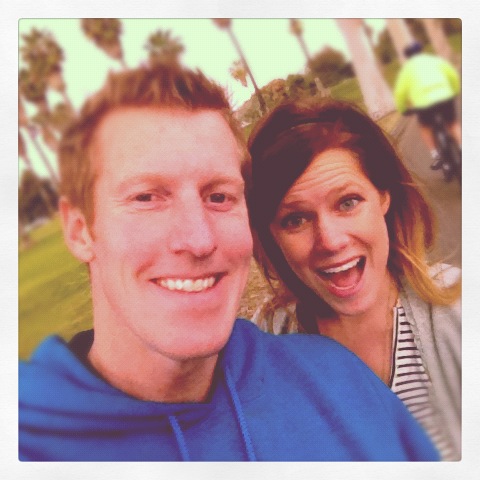 And when it was all said and done, despite the fact that many people told me that riding a tandem can be difficult and was not fun when they tried it, it was my favorite date I've ever been on with the husband that leads me and loves me well.


*Linking up with Casey Leigh and Call Me Blessed!*

this is amazing hahaha. we were just in san fran and saw so many tandem pics and I was wishing my hubby didn't have tailbone issues and could ride a bike (he broke it years ago, it got infected and he had to have some surgeries so he cant ride). Way to work on your marriage!!

LOVE love love. There is such truth in this!!

Love the analogy and love the Russums!

You two are so cute! I am horrible at riding bikes too--so I might have to give that tandem thing a try! Glad you guys had a good vacay!!

this is awesome :) Love your heart and love these pictures!

Just found your blog! Love it!

Visiting from the blog hop. You guys are so cute, and a slurpee machine at your wedding? Coolest. Thing. EVER!

this is fabulous! thanks for sharing :)

Love the lesson you learned and that I have that same shirt...but mostly the lesson part. :) Visiting from thee blog hop. New follower!
Mary
www.trustychucks.com

Hi there! Thanks for stopping by my blog! I always *love* finding another Horned Frog in the blogosphere. :) I graduated in 2003 - what about you?

I'm a new follower from the blog hop. :-) Would love if you have a minute to check out my blog! www.punkprincesscreations.blogspot.com

I seriously can't tell you how much I love this blog post, Jen. It's so wonderful that you saw such valuable lessons in this activity, and even better that you were led to share them with others. Bravo, my friend. :)

Found your blog via the Blog Hop. I’m your newest GFC follower!
http://our-reflection.blogspot.com/

ummm LOVE this..omg it makes me want to do this with my hubbs, we love riding bikes together but have never done tandem. makes me nervous. but i LOVE the illustrations the Lord showed you through it...such a great picture and I will remember these words of wisdom. :) love to you today friend!!

You're such an encouragement to me. I want to be like you when I grow up.