Happy Valentine's Day y'all! I posted this over on Jordan's blog last week, but just in case you didn't catch it... here is my confession on how I USED to feel about Valentine's Day...


{Also, if you want to read the complete but condensed version of my love story with Micah, head over here!}

I used to be a Valentine’s Day hater. I really did. It reached its height in college, and I’m sure people thought I was a hater because I was single and bitter, but that simply was not the case. First of all, I was never the type to waste away wishing for a boyfriend when I didn’t have one. I actually preferred to be single most of the time. Secondly, I had spent many a Valentine’s Day with a boyfriend and I just found the holiday to be completely awkward. 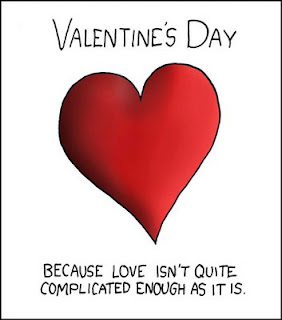 Exhibit A: My husband {Micah} and I have a long love story. We dated in high school for a couple of years, broke up when we went away to college in separate states and began dating again after graduating college. Our first Valentine’s Day together was during our junior year of high school when we were in that kinda-starting-to-date-but-not-yet-officially-dating stage…  so what’s girl to do? Valentine’s Day is awkward when you haven’t had the ol’ DTR… so I bought Micah a giant blueberry muffin and put it in his locker before school. I thought it was understated and sweet. About a month later I noticed it was still sitting in his locker getting all moldy. Oh well. We’re married now.

Exhibit B: It’s now our senior year and Micah and I are very officially dating. Giving in to the pressure to do something special for V-Day, Micah and his cousin plan a double date at a fancy restaurant for his cousin’s girlfriend and me. The main problem? It’s a weekday night and it’s a little rushed/weird to go out for a fancy dinner after sports practice, and I don’t really know the cousin’s girlfriend all that well, so it’s hard to keep a good conversation going at dinner. Oh, and I got these steak kabobs and as I was trying to remove the meat from the stick, it flew into my lap. Twice.  And, yes, the whole table noticed. Twice.

Exhibit C: Now I am in college and single. My best friends and I decide Valentine’s Day is way overrated. Some of our friends plan to go to some party where a bunch of guys and girls who have crushes on each other but don’t have the guts to do anything about it will spend the night pining for one another and being awkward. We stay home.

Exhibit D: Second year in college. I get Valentines cards from two different girlfriends trying to convince me to like Valentine’s Day and to love “love.” I don’t budge in my convictions.

FINALLY, a few years after college, when Micah and I had begun dating again, I began to sway in my steadfast hate just a little bit. One year, I made a fancy-schmancy dinner {bacon wrapped filet mignon anyone?} and served it to him by candlelight. Oh, and I surprised him with tickets to the March Madness tournament {#bestgirlfriendaward?}. Since then, we’ve kept it pretty simple. Last year we had dinner with another couple, and the guys planned and cooked the whole meal {with a little assistance from the wives when they had questions.} This year my gift to Micah is going to see the Real Marriage conference in Phoenix the weekend after Valentine’s Day. So, I confess, I’m not a hater anymore. I think the commercialization of the holiday is a little silly, but I participate to an extent. It is important to celebrate love and I guess I am okay with the fact that someone chose February 14th to do just that. I do remember loving Valentine’s Day as a child – exchanging cards and candy at school and then coming home where my parents would surprise my sister and me with a gift and a flower. I’m sure my hater heart will soften a bit more over these next few years, because I am secretly excited to make Valentine’s Day special for my own children someday.

:) glad you aren't a V-day hater anymore, haha! Have fun at the marriage conference. BTW, my 'our story' link up is up, and since you've already shared your story on my blog this week, feel free to link this one if you'd like! It still fits!

I used to be a Valentine's Day hater too, but then a friend told me it was about showing others that you appreciate them and that changed my outlook on the whole thing. It gets rid of the commercialism and focuses on the relationship instead - which is where you ended up!

You guys are adorable!! Have fun at the conference! Can't wait to hear about it. XOXO!

You two are the cutest!
I've always loved Valentines... even when I was single! It may have something to do with all the pink and hearts though. Yep, I'm that kinda girl :)

Awww you guys are too cute.
Have you made any blueberry muffins for him since? Lol
We don't really celebrate big here. Tonight I'm cooking him his fav dinner and he said he will clean the whole house for me lol

So excited for you guys going to the real marriage conference!! I've been watching the sermon series online and my book should be arriving in the mail today!!

And we don't necessarily hate Vday.. we just choose not to participate. After years and years of working in the floral industry and watching all the ridiculousness of it, I'm just over it. I think the only Vday we ever celebrated was the first year we were dating, which would have been 2003? But I did give a Valentine to my little valentine today :)

Thanks for sharing your story of your evolution of V Day. I agree on the subject--it's not about the Hallmark side but about celebrating love however you and your loved one(s) see fit. Enjoy the conference and I hope to read a post about it!

Hehe. I love this. I've never been a hater, but I think it's a little superfluous sometimes. You can take V-day too far. I do love to celebrate love though! :) Happy v-day! :)

i am current disliker of V-day and I'm married! I just don't want it to be about having to get me flowers and chocolate and going out to dinner... but I do realize it's a good day to celebrate love and I know that once I have children, I'll love making it a special heart-filled day!

And one year you helped throw me a half-birthday party and it was way better than a Valentine's party. Love you!

Lovely post, Jen! Glad to see that you could find your own way of enjoying and celebrating the holiday. You must do a post (or at least email me your thoughts) on the Real Marriage event! It's been exciting going through it as a church, week by week and chapter by chapter, but I'm interested in hearing how the messages are received in a setting like that.