I was listening to a sermon recently on Luke 1 about the arrival of the angel to Zechariah {to announce the birth of John the Baptist}. The angel arrived when Zechariah was completing the special priestly task of lighting the incense in the temple while all the other priests were outside praying.

When the angel arrives, he stands next to the incense and says “Your prayer has been heard, and your wife Elizabeth will bear you a son..." {Luke 1:13}.

Hold the phone. Zechariah was an OLD man. His wife was possibly even older than he was – “advanced in years" as he reminds the angel.

So why was he praying for a son? Shouldn’t he have given that up long ago?

Maybe he was still praying actively for a son each day, because he knew that age, menopause or a barren womb could not stop the mighty God that gave a son to Abraham and Sarah when they were older than most of our grandparents.

Or maybe he had prayed for a son for years and years, and even though it seemed too late, God knew that in the depths of his heart, Zechariah still longed for a son, even if his lips no longer uttered the words.

The story of Zechariah {although he doubted the angel’s news and was struck mute for the next nine months} is a sweet reminder of God’s faithfulness to answer our prayers.

I’m sure you’ve heard this before, but God always answers our prayers… with a “yes,” “no,” or “later…”

But sometimes that later is much later… like months, years, or decades from now.

Don’t give up praying to the Lord even if you don’t get the answer you want immediately. Why? Because God might answer the prayer when you are old. Long after you assume his answer is "no" you might discover his answer was "later..."

And the other reason to continue praying? Prayer honors God. It is an act of worship when we go to him humbly and dependently and ask for his help or his blessings.

It was significant that Zechariah was lighting the incense when the angel appeared to him to announce his prayers had been answered. In Revelation 5:8, it shows us a vision of heaven where “the twenty-four elders fell down before the Lamb, each holding a harp, and golden bowls full of incense, which are the prayers of the saints."  Our prayers are a pleasing aroma to the Lord and he remembers them, even if we cannot discern his answer right away.

So keep praying. Keep hoping. Keep praising God with your prayers. He is good and His answer, whether "yes," "no," or "not yet," is always the answer that is best for you because He loves you. 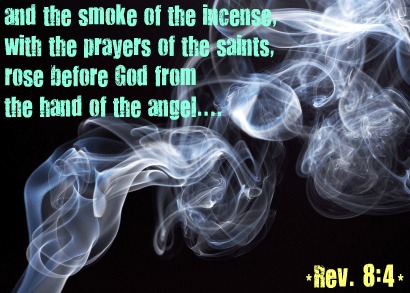 Linking up with Casey and Jami.

Defnitely needed to read this today, thank you lovely

I love this post! Thank you for sharing this.

Praying is the ONLY way to go!!

I love this post and thank you for the great insight!

Mr. Taylor and his Lady said...

i really loved this post. and i feel like i really needed it. lately i have been giving up on some of my prayers, but i must continue to have faith that the answers will come in due time :)
xo TJ

true story, sister! thanks for the reminder

Thanks Jen! I needed this :o)

How fitting for this season of life God is taking me through! Thank you for posting this. I appreciate it a lot! :)

Love this! He is faithful!