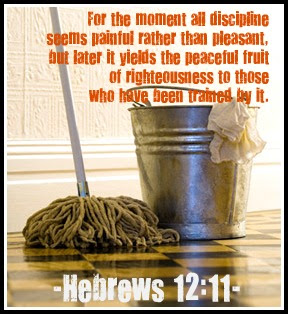 One evening last week, as I was peacefully typing away in my new little office area we set up in our guest room, I heard some strange sounds coming from the bathroom. Soon enough Micah poked his head out looking all flustered and asked me to get the mop for him...

Yes. The toilet had overflowed.

Now it's not as gross as you might be thinking. There were no "dark" remnants and he swore to me it was only a number one.

But he also swore under his breath. Because he was standing in a puddle of questionable liquid and I apparently wasn't moving fast enough to come to his aid.

And I really wasn't moving my fastest. Because while he was in the bathroom, mopping and angry about this gross inconvenience, I was justifying my reluctance to help him. "Well, I clean our whole house all the time; it's about time he had to clean something." "Well if it happened to me, I wouldn't even ask for his help."

It was not our finest marriage moment. Both of us were rude, wrong, sinful.

Thankfully though, we both realized it. We got the water cleaned up and a few minutes later we were both apologizing and repenting of our sin. We talked about our wrong attitudes and sincerely apologized to one another. At least I was pretty certain it was true repentance, but then God said...

Because thirty minutes later, as we were getting ready to climb in bed (way past the new bedtime we are trying to establish for ourselves), Micah took his pre-sleep pee...

and it happened again.

This time when he stuck his flustered face out the door, he politely and calmly said, "Will you please get me the mop again?"

This time I rushed to his aid.  As he began mopping, I quickly filled a bucket with hot water and bleach. As he was rinsing out the mop and dumping the bucket, I was drying the floor with a towel. This time we plunged the toilet together to make sure it was fully cleared - because I still had not had my own pre-sleep pee!

Never have I so visibly seen God test us in marriage. Now I realize this wasn't the huge loss of job-house-child kind of test. It was small, but perfectly clear. We sinned, we repented, and then God tested us to make sure we understood what our repentance should really look like. For this is what He has commanded us...


Put on then, as God's chosen ones, holy and beloved, compassionate hearts, kindness, humility, meekness, and patience, bearing with one another and, if one has a complaint against another, forgiving each other; as the Lord has forgiven you, so you also must forgive.
-Colossians 3:12-13-

We finally fell into bed at midnight, feeling slightly unsanitary but also way too tired to shower. We gave each other a kiss goodnight and fell asleep, knowing we had passed God's test.

It was a pee test...but not the regular kind.

Oh my gosh I just laughed at this! A pee test :) God does have a sense of humor!

What a great (and funny) story! God tests us in some interesting ways :)

I am still Laughing. God has such a great sense of humor! Glad you both past your test.

Hysterical! Oh the things God teaches us in marriage!! ;)