I grew up hating vegetables. Like I pretty much despised them all except for lettuce and potatoes. And those are hardly vegetables....more like water and starch.

My parents never forced me to eat anything, but there was a rule at dinner that you had to try everything on your plate if you wanted dessert. Well, of course, I wanted dessert! Are you kidding me? We were totally an ice cream family and I wanted my chocolate chip mint after dinner. So I made up a silly rule for myself. When my mom would make peas or corn {the two most common veggies served in our house - blech! - still don't like them}, I decided I would eat as many kernels as my age. So if I was seven, I would eat seven kernels of corn and so on...

Except I didn't really eat them. I swallowed them like pills with my juice, so I would actually have to taste them! Yes, it's true. But I always got my dessert...

Fast forward about 18 years. Micah and I were dating and were on the path to marriage, except there was one problem. I was 25 years old and I still didn't like vegetables. Micah likes vegetables... he wanted to eat vegetables when he got married...he wanted his wife to cook him vegetables...so he set off on a mission to make me like vegetables... and it WORKED!

He explained to me that most kids grow up hating vegetables because they are cooked poorly and one bad batch can leave the wrong impression. Vegetables are easy to overcook and busy parents often don't season them properly. Whatever the reason, he explained that I had probably been served gross vegetables growing up {sorry Mom!} and that he was going to show me that they could taste good. We started with broccoli and asparagus. We would steam them, but not overcook them {so they still had a slight crunch}, and season them in lots of different ways. It got the point where I tolerated them. I could eat a small portion for dinner. Then I discovered fresh green beans {preferably the french-style petite kind}. Steam them and add some sea salt, pepper, and garlic and they are GOOD! As in, I actually enjoyed eating a full serving. Whoa. It only took about 26 years.

Fast forward, two more years. First year of marriage. I came across a little recipe in Real Simple that changed my vegetable intake forever! This recipe recommended seasoning my broccoli with red pepper and roasting it in the oven! I cannot even tell you how good it is. You must try it for yourself! This is coming from someone who hated vegetables for a QUARTER of a century, so you must believe me.

Here is what you do. Preheat your oven to 350. Chop up some broccoli. I always just buy a couple crowns at the grocery store {Super inexpensive! Usually one crown feeds Micah and me; I buy two if we are having guests}. I like my trees as little as possible, because even though I love the taste of this recipe, I still get uncomfortable taking BIG bites of veggies. The bigger trees always go on Micah's plate; the smaller pieces go on mine.

Put the broccoli in a small mixing bowl and pour some olive oil over the pieces {maybe 2-3 tablespoons}. Stir the broccoli and oil around until every piece has some oil on it. They don't need to be drenched or anything.

Spread the broccoli out in one layer on a baking sheet.

Sprinkle salt and/or a seasoning salt like Johnny's or Lawry's over every piece. {I use Johnny's and love it!}

Sprinkle a little bit of ground cayenne red pepper over broccoli {ideally a little will hit every piece, but you don't want TOO much or it will have a little too much kick}. 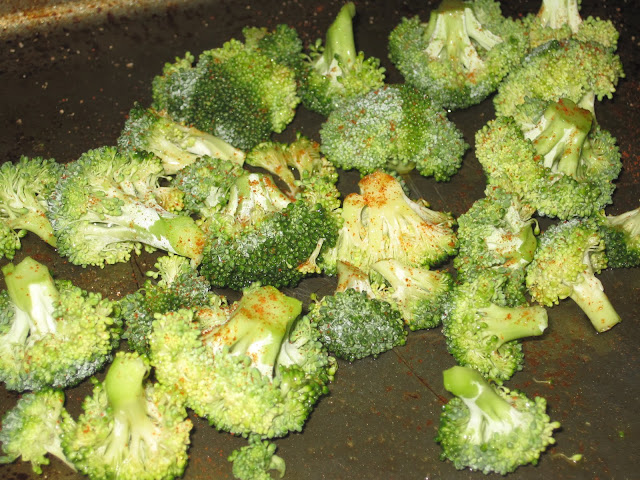 Pop that tray in the oven for 8-10 minutes {until broccoli turns to a deeper, brighter green}. It helps to stir/flip the broccoli after about five minutes, but it's not necessary.

Serve immediately. You will LOVE it!

P.S. If you are lazy {like me}, you can skip the bowl step. Just spread your broccoli out on a baking sheet and drizzle a little olive oil over every piece then add the seasonings. I definitely suggest stirring once during baking if you use this method, so the oil gets mixed around a little bit.

P.P.S. This exact recipe/method tastes great on asparagus as well!

I like roasted vegetables best. And if you think I overcook them you should have tried my Mom's!

What a neat idea. Broccoli is one of the few recipes my daughter eats. We often make casseroles so that I can add in other ingredients and change up the taste a bit. I'll have to try baking it like this.

Welllll, I like all vegetables. ;) And this broccoli looks DELISH!