I have learned in recent years that God puts exactly the right people in the right place at the right time...


A few weeks ago I went out to dinner with a couple girlfriends. And by a couple, I mean exactly that. Two other girls. And it was a fabulous night. However, five years ago I might not have considered this a fabulous night because it didn’t go according to plan. The plan was to go to dinner with five or six of us. E-mails were sent. Dates were established. Times were set. We were having a Thursday night girls’ night to celebrate the start of summer.

However, plans changed. Alexis was completely drained from work and too tired to go out to dinner. Lisa needed to stay home with her husband for some quality time that they had been lacking lately (something I am waaaay more understanding of now that I am married), and Anne got a migraine (poor girl!). She fought it off all day and took every medication under the sun to try to get rid of it (probably too many!), but it just wouldn’t go away. She regretfully had to back out of dinner like an hour before and she was really sad about it.

So it was just three of us. And it was perfect.

Now this would have bothered me a few years ago, because my understanding and trust of God’s sovereignty was so limited back then. I would have been annoyed that we planned a big girls night and only three people showed up, even though I completely understood why some people couldn't make it. My love of being social, hanging out with other women, and making plans would have left me disappointed. But God has taught me many things over the past 3-5 years of my life, and one is to trust Him in the small things. He ordains who shows up to dinner. He guides conversations. He brings new people to church. He chooses that the one $10 TV that you decide to buy on Craigslist happens to be owned by  mortgage banker who is now helping you buy a home (true story). God is sovereign over the big and small. And while I appreciate God’s mighty acts and have been surprised by the miracles He has revealed to me in my lifetime, I am learning more and more to notice and trust the small ways He works in the day to day. And our girls' dinner was just one example of this. Although I missed having Alexis, Lisa, and Anne there that night (and would never wish a migraine on anyone!), I refused to be disappointed and went into the evening with a quiet eagerness to see what God had planned.

And what great things He had in store.

First, Shalyn and I got there early to wait for a table and we got to have a great talk about exercise and discipline and fighting pride in working out and body image. Good stuff. Well not the pride, but talking about it, revealing it, fighting it. Blessed by that conversation.

Then we got a table and Jenney arrived. Jenney is a newer friend. She and her husband started going to our church a couple months before Micah and I did, and we have been wanting to connect with them. Shalyn, Jenney, and I had a delicious dinner of FREE bruschetta (thank you coupon!) and a great conversation. Shalyn had to take off a little early to go to the gym with her husband (go Bakers!), so Jenney and I continued to chat. And chat. And chat.

When we decided we had been hogging our table too long, Jenney asked if I would like to head next door to LGO to grab some coffee.  Jenney ordered a cappuccino, I opted for pineapple gelato, and we sat on the patio until late into the evening. Okay, it was like 10pm, but we are both students and this was our first real night of summer after finals week, so we felt like party animals, drinking coffee and eating ice cream and NOT writing papers or studying for tests at 10pm.

Our conversation was such a blessing. Just getting to know each other better. Talking about marriage. About being a student at an age when no one else is a student anymore. The challenges of balancing the wife and student role. Talking about church and God and all that good stuff.

Basically, the whole night was a huge blessing. And one that probably wouldn’t have turned out the same way if six of us had shown up to dinner. I look forward to dinner with all six of us someday, but it will definitely have a different dynamic and probably won’t end with a long, sincere conversation with one friend on the LGO patio. I like both nights. Coffee and talking with a friend. And laughter with lots of women. 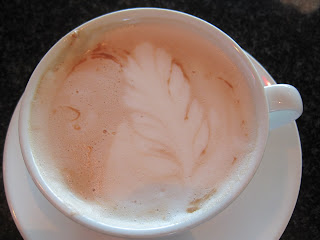