One time at our Missional Community Group this past spring, we somehow stumbled upon discussing the idea of "reward" in heaven. One guy in our group asked "If I want to out-do people on earth, so I have more reward than them in heaven, is that wrong?" Yes, our pastor replied. Thank goodness. I don't think acting out of "selfish ambition" (Philippians 2 happened to be what were studying that night) - sinfully competing with your neighbor to earn God's blessing - is really going to get you any type of reward on earth OR in heaven.

A girl in our group piped up and said that JESUS is our reward in heaven, which was considered the "John Piper" answer {ummm...I totally agreed with her, because I think John Piper is right...but moving on...}.

And another guy asked, why use the term "reward" at all then, if reward just means salvation or eternal life with Christ? In his defense, he was kind of playing devil's advocate/thinking out loud and it was a super interesting discussion...

For some reason, I felt really fired up about all this. Just salvation? How could anyone even compare our idea of earthly rewards (money, fame, material goods, comfort, praise and acknowledgement) to the glory and goodness of KNOWING God and living eternally with Him? First, I have to admit that a few years ago, I might have had some of the same questions about reward, but as I see more and more of God's grace and goodness in my own life, and reflect on the love He has for me that covers all my awful sin, the last thing in the world I am thinking about is what kind of "rewards" I will get in heaven. Are you kidding me? I get to go to heaven?!?!

As humans, I think we have such a limited understanding of what ETERNAL life with God means...how much value there is in that alone...that we seek to compare salvation to the rewards of this earth. After all, Paul does say: "For now we see in a mirror dimly, but then face to face" (I Cor. 13:12). I guess it makes sense that the idea of heavenly reward is confusing since we are not in heaven yet.

So this question about reward led me back to the Bible to search out what God really says about reward. For some reason, over the past twenty years or so (or maybe it just seems like the last twenty years, because those are the years I have been alive to see), it seems like there has been this growing idea about reward in heaven, an obsession with being honored by God there, the whole idea that good deeds on earth will result in jewels in one's crown later on or gifts or prizes or something like that.

But the Bible doesn't really talk about reward as jewels at all. Here are some examples:

The Psalmist David writes in reference to God's commands: "Moreover, by them is your servant warned; in keeping them there is great reward." (Psalm 19:11). What is the reward here? Well, first of all following God's Word prevents us from folly and hardship (it "warns" us about sin). But secondly, the reward of following God is to have assurance of salvation and ever-increasing growth of character. The reward is NOT trying to be more obedient so God will reward you. The reward is being a more holy, obedient child of God.

Jesus says to his disciples "But when you pray, go into your room and shut the door and pray to your Father who is in secret. And your Father who sees in secret will reward you." (Matthew 6:6). I don't know exactly what Jesus meant by this, but it seems to indicate some kind of earthly blessing. Intimacy with God perhaps. God's favor toward the prayer itself. Some kind of other blessing for obedience. It seems like a simple example of the way that God longs to reward and bless his obedient children during their earthly lives.

And now my two favorites...

The writer of Hebrews, in the Hall of Faith, explains that Moses chose to forsake his comfortable Egyptian upbringing to live with his poor, enslaved Israelite poeple because "He considered the reproach of Christ greater wealth than the treasures of Egypt, for he was looking to the reward" (Hebrews 11:26). Moses did not really know of Christ like we know of Him. He probably had some vague idea that God would send a Messiah, but even that was likely pretty hazy. Yet, he was willing to suffer as Christ did, because He knew that God was great and worth suffering for. His reward was in heaven. In this same passage, the writer talks about all those who died without seeing much, if any, earthly blessing for their faith. Abel was brutally murdered by his brother. Noah lived through the flood. Abraham wandered around and lived in tents in order to obey God. Yet these men "all died in faith, not having received the things promised, but having seen them and greeted them from afar, and having acknowledged that they were strangers and exiles on the earth... But as it is, they desire a better country, that is, a heavenly one. Therefore God is not ashamed to be called their God, for he has prepared for them a city." (Hebrews 11:13-16). The reward for their faith is to dwell with God in a heavenly city. And I'm pretty sure the ultimate reward is seeing the One who has prepared that city for us.

And finally, I think Colossians 3 says it best: "Whatever you do, work heartily, as for the Lord and not for men, knowing that from the Lord you will receive the inheritance as your reward (Colossians 3:23-24). Our inheritance is life with God. To be counted as sons and daughters of the Lord God Almighty. To be the brothers and sisters of our Savior Jesus Christ. Everything else pales in comparison. Any other blessing or reward is "rubbish" compared to knowing Christ (Philippians 3:8).

I'm not saying that blessings won't abound in heaven. I can't even imagine the goodness that awaits us there. The Bible doesn't say that much about it in detail, but Jesus promised he was returning to prepare a place for us there, and I know there is going to be an amazing feast when the bridegroom, Jesus, celebrates with His bride, the chuch. Other than that, I don't really know what heaven's rewards will look like... except that I know I will get to see the Father and the Son face to face, and there is NO better reward than that. 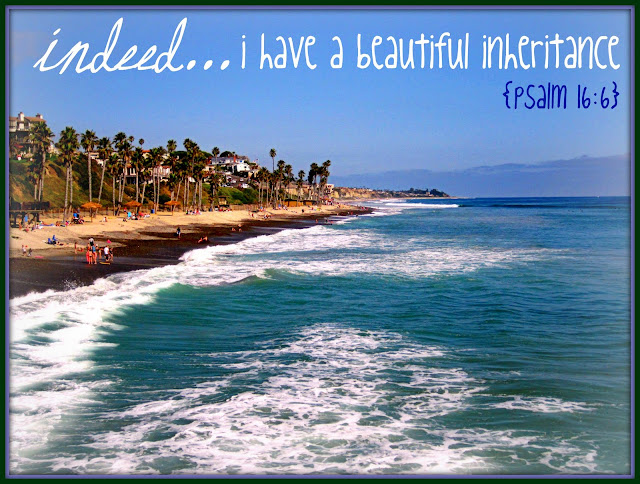 Beautiful! This post makes me excited for heaven! Have you heard Phil Wickham's CD "Heaven & Earth"? It always gets me pumped up to spend forever in eternity. Great post, as always, my friend.

Thought I would comment and say neat theme, did you make it for yourself? It's really awesome!