Winter in Arizona - No Heat Allowed...

So I believe it's officially winter in AZ. I  know it's not technically the winter season until late December, but I think "winter" is here. Other parts of the country are zipping up their coats and seeing snow on the ground, but I think we desert folk have also transitioned out of our almost-eternal summer. Yes, it was almost 90 degrees this past Sunday, and I was planning to lay out by the pool until a much needed nap on my bed distracted me. But now it is winter, and here is how I know:

1) For two days in a row, I have a worn a cardigan or a long sleeved shirt all day without removing them, even while walking in the sun across campus. It's been in the low 70s here. The low 70s is basically Seattle's warmest day of the year, now it's my winter. I like that.

2) I wore dress SOCKS to school today. I have not worn socks, other than for running, probably since last May, but today my feet were so cold I had to bundle them up.

3) This is the most official reason it is now winter in Arizona. This morning  I woke up cold. Our AC is technically still on auto and set at 82, but hasn't turned on the past couple of days due to the lower temps. I put on a little sweater when I woke up, and after Micah left for work I settled down on the couch to do some reading, but it was just too cold. I decided I would try to turn on our heater. Our house was currently 68 degrees, so I put the heat on at 70 and returned to the couch to read my heart out. I was expecting the gross, burning smell that always accompanies a heater that hasn't been turned on for six months (Washington readers probably don't even know about this), but what happened was much more alarming. Yes, our smoke alarm went off! I jguess the smoky smell of most heaters doesn't apply in Arizona, where heaters are used so infrequently that they actually produce smoke when turned on. I quickly turned the heat off, opened the front door, and waited about 30 seconds for the most obnoxious sound in world to cease. By the way, I HATE loud noises such as beeping, honking, and banging ESPECIALLY in the morning. I continued my reading, but I was still cold, so after another 15 minutes or so, I decided to give our heater another try, but not without caution. I turned our heat up to 70 again and spent the next five minutes waving a throw pillow in front of our smoke alarm to prevent it from going off again. It blinked red a couple of times, but my upper body workout totally paid off. No more alarm and I think we now have a funcitoning heater for this 70 degree Arizona paradise called "winter."
No comments: 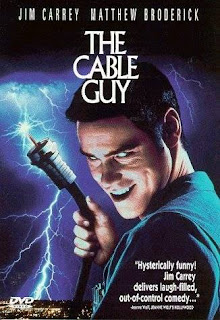 No, I'm not talking about Jim Carey, but this guy is almost as annoying. So our apartment complex has a little gym, which I use quite frequently. Unlike most people, I actually like running on a treadmill. Soon after we moved in, we encountered the Cable Guy in our gym. This guy does not work out, yet he spends more time in the gym than your average power lifter. He sits on a piece of exercise equipment in street clothes and watches the TV on the wall. When we saw him do it the first time, it was kind of funny. The second time, kind of weird. The third time, incredibly annoying because when other people are in the gym actually using the exercise equipment to exercise (gasp!) and not as a couch, Cable Guy will turn up the volume on the TV to hear it over the hum of equipment. On this third encounter, I finally asked him to turn it down because I couldn't even hear the music from my own i-pod directly in my ears. By no means was I going to crank up my music and ruin my eardrums so that Cable Guy could hear the commentators on ESPN. Ever since these first few encounters, we have been trying to figure this guy out. He can be found in the gym at all hours of the day. Does he have a job? Can he not afford cable or is he just frugal? Does he have a family?

This past week I walked into the gym for an evening run only to find Cable Guy eating his dinner while watching TV. Nothing like the smell of a big spicy sandwich while I'm running three miles and a half miles. I would have just stayed home and run laps around my own kitchen, but apartment square footage doesn't allow it. This time I knew Micah was going to meet me in the gym in about 10 minutes, so I left the door cracked for him, since I had our only key. Right before Micah arrived, the door was shut by some other actual exercisers on their way out. When I saw Micah waiting by the door, I asked Cable Guy if he could let him in so I didn't have to stop my run. Is that too much? I mean I was on my first fast interval in my 30 minute run and he was just sitting there watching some USA TV show. If either of us needed the extra exercise, I don't think it was me.

To be honest, if you haven't figured it out by now, the Cable Guy annoys me. The gym is not a living room. I don't want the volume of his TV shows to ruin my hearing. I don't want to smell  his dinner while I'm running. His presence during my workouts irritates me. However, Micah has pointed out to me recently that there are too many guys like Cable Guy in our apartment complex (although most of them actually pay for their own cable and watch it at home). But what I mean is that this world is full of cable guys and girls. Americans who sit on their couch every night and zone out in front of their TVs. People who have no purpose and no passion and just use TV to fill their time. Again, Micah was the one that wisely pointed out that we should love the Cable Guys of the world and show them Christ. So instead of hating on the Cable Guy as I run, I should probably start praying for him. Maybe one day we can have a meaningful conversation about life over his dinner... in the gym.
1 comment: