Thursday nights are my "study night" - the night where I leave after dinner and study until bedtime at some local place. Sometimes I go to Borders. I like Borders because of their quiet environment, free wi-fi, and the fact that I don't feel obligated to buy anything like I do at a coffee shop. However, the downside to Borders is that it closes at 10pm and I usually like to study until 11pm.

This often leads me to The Gelato Spot. The Gelato Spot is a modern little gelato and coffee shop with good, overpriced gelato. The upside to studying at the Gelato Spot is that I feel obligated to buy gelato. Gelato is good. However, this place is annoying because they only let you put one flavor in a small, and a small costs $3.69. I appreciate the Gelato Spot (still annoyed that this place does not have an appropriate nickname... pretty sure they did that on purpose), because it's open until 11pm, which coincides with my typical studying limit for one evening.

So the pros to this place are that I get to eat gelato while I study and that it is open until 11pm. The cons are that the gelato is expensive and I only get one flavor. However, there is one new factor that I discovered last night, and I'm not sure if it's good or bad or just another intersting thing about living in Socttsale. I'm pretty sure this place is run and frequented by the Mafia. I'm not kidding. If there are remnants of the Mafia left in the Southwest (and my grandparents swear that the mafia used to basically run Las Vegas in the 70s), I'm pretty sure they are living in Old Town Scottsdale. 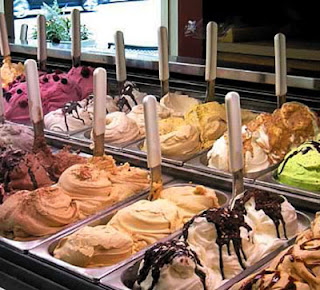 I've always noticed that many of the patrons of The Gelato Spot seem a little European. Lots of accents and trendy, European-ish clothing. But it was not until last night, in the middle of the most boring reading about psychoanalysis and the ecomony, that I stopped to do my own full analysis of The Gelato Spot. Every guy in the place had an accent - and I'm pretty they were all Italian accents. It makes sense, since gelato is from Italy and the Mafia is from Italy. I also paid attention to the weird Euro clothing trends on every guy in the place. And then I picked up bits of pieces of the conversation behind me. Three men talking about business things, and I'm pretty sure I heard one guy say: "That's a lot of money. What are you going to do if he doesn't pay?" Long pause. "Kill him. Unless he kills us first." It was said in a mildly joking tone. But who jokes about that kind of stuff? I have never talked about killing someone who owed me money. Killing has never entered into any of my business transactions. I'm pretty sure it wasn't really a joke. I'm pretty sure it was just the Mafia at work.

Check it out online http://www.gelatospot.com/ and if you come visit us we'll take you there. The website says it's the "Dessert Lounge of Italy"... but I'm pretty sure they are conveniently leaving out that it's also the Mafia Lounge of the Phoenix Metro area.

We have had a number of people tell us since moving here, that Arizona is the number one state for identity theft. Keeping this statistic in mind, I have tried to be extra conscious about what I throw away. I have taken to using Micah's handy shredder for just about everything. Micah has seen 'dumpster divers' on more than one occasion around his work. We are very careful...

However, I came home last Saturday to an e-mail telling me to call my credit card company immediately due to suspected fraudulent activity. I called and right away was asked if I tried to use my card for a $25 purchase at McDonald's earlier that day. Question #1: How does one even manage to spend $25 at McDonald's? Disgusting. #2) Do you know me? The only way I am going to spend even $2 at McDonald's is if I'm buying a $1 Diet Coke in the summer for me and a friend. I don't eat Mickey Ds. I'm not loving it. I just saw an article claiming that a Happy Meal is not fullly processed in child's body for seven years. Enough said.

Then the lady on the phone proceeded to list the other transactions made that day that were also denied - in addition to the ones that were not denied and are still sitting on my card until all the paperwork goes through to dispute the charges. Burlington Coat Factory anyone? I looked at my statement the other day and it appears all the charges were made in Michigan. How did someone in Michigan get my card number? I have no idea. I still have the card in my wallet, so it didn't get stolen.

The most upsetting thing about this whole ordeal is that I had to get a new credit card number... I have had the same credit card since I was 18 years old. Those 16 digits are my friends. Now I am going to have to memorize 16  new numbers. That is going to make online shopping very difficult for awhile... maybe God was trying to tell me something.
1 comment: